I decided to replace the hot end on my Folger printer with an E3D. The model I went for is the E3D lite6. The full E3D v6 allows you to go to hotter temperatures, and as I rarely print anything other than PLA, this isn't much of an issue. Besides, you can iteratively transform a lite into a v6 by replacing some of the parts. I bought mine from filastruder, and they delivered promptly, with the trademark pack of Gummi bears.

The E3D lite6 comes as a kit. Assembling it is fairly straightforward, and there's only a couple of things I found tricky. One was keeping the thermistor insulation in place as I tightened the mounting screw for it. A bad of glue might have helped. The second was getting the PTFE insert in solidly, as it tended to slip back a little as I pushed the collet on. The instructions recommend holding pulling the collet up with a fingernail as you push the PTFE in. A third hand would have helped to hold it all steady while I did this. As the instruction say, the screws for the fan are tight - very tight, in fact, and they didn't got all the way in. The fan is a little noisier than the original one, with a slight hum which could get annoying. I was a little nervous about the step of heating the nozzle to 245C then tightening it up with a wrench. It turned out to be easy and I didn't end up with the third degree burns I was expecting.

There are several good mounts for E3D on the Folger extruder, such as this one. I didn't have all the parts I needed for it, and decided to go for something simpler, by simply replacing the aluminium block which holds the hot end in the original extruder with a printed block that can hold the E3D. Although this sounds simple, I ended up going through many failed versions before I got something that worked. 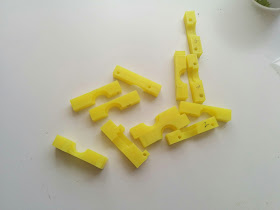 Part of the problem was that I initially mismeasured dimensions or misread them from the plans, so I had the mounting holes 1mm further apart than they should be, and the position of the E3D relative to the mounting holes also off by about 1mm in both the X and Y directions. What I also hadn't allowed for is that the front on the motors is not flat: there is a disc of diameter 22mm and thickness 2mm around the motor shaft. The E3D is only 9mm in front of the flat face of the motor, and the top of the E3D is 16mm in diameter. Put all this together, and you either need to make sure the E3D it below the disc on the motor or in front of it. Below doesn't work, as the mounting holes would then cut through the 16mm rim of the E3D, so you have to move it forward. And then the center of the E3D doesn't line up with where the filament comes out of the bottom of the extruder. This is probably all incomprehensible. Here's a screenshot from Blender which maybe clarifies some of the geometry: 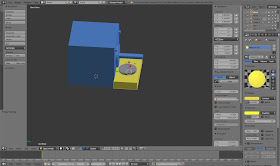 The extruder positioning can be solved by moving it forward a tiny amount, which you can do by inserting a washer on each screw between it and the motor. The block is printed in two pieces which clip onto the motor. I mounted it with 30mm M3 screws. They are slightly too long, and the nearest other size I had was 20mm which is definitely too short, so I padded it out with more washers. Here are some pictures of the finished product: 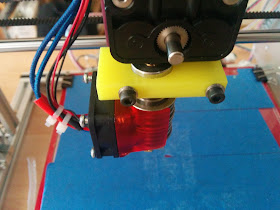 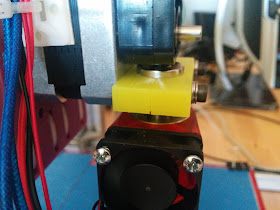 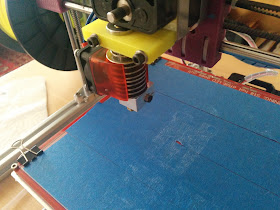 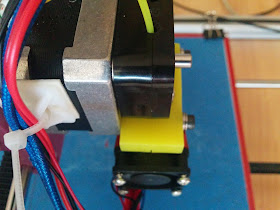 In doing this, I got rid of a fan shroud and a light that I had attached to earlier. The fan is for cooling the object as it prints, and I might add this back if I need it. The light was useful in the early days when I wanted to look closely at what the printer was doing, but I've not made much use of it recently, so I left it off for now. Less weight on the X carriage is probably a good thing. I also changed the way the motor attached to the X carriage, so it is mounted using the bottom two screw holes in the back of the motor rather than the top two. This reclaims all of the extra Z space taken up by the E3D.

Is it an improvement? It's really too early to tell. All I've printed so far are a few test objects. The nozzle oozes slightly, though less than my old one. I've printed down to 0.05mm layers. On a thin wall cube, I don't see the slightly wavy patterns that I used to, though they didn't always show up before.

(Footnote: there is a second version of the mounting block at http://www.thingiverse.com/thing:1030184.)