3D: Some mods, and a rocker switch

I've made a few additions and adjustment to my 3D printer, using parts made on the printer itself.

First, a very trivial change which helped a lot. The Folger kit includes a small plastic loop that attaches to the top of the left hand Z motor to guide the filament. They say attach it to the front outer corner of the motors. Moving it to the back inner corner gives a much straighter path for the filament, and the spool moves more easily as a result. I also printed a small cylinder to act as a spacer between the spool and the frame. If you don't do this, the left hand end of the X carriage rubs against the spool. I haven't seen any evidence of this affecting the prints, but it seems like a bad thing. 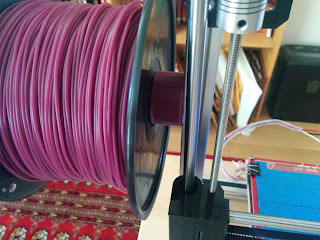 I made a mount for the LCD controller which clips to the top of the frame. Here's how it looks: 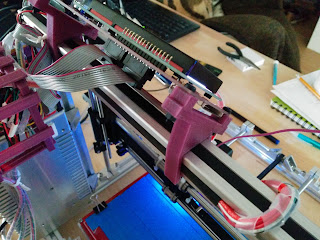 The model files and another picture are here.

On the extruder, I added a fan shroud which should direct some air to cool the object being printed, using this model. I'm not sure how much difference it makes. I also attached a light as the extruder casts a shadow making it hard to see the details of what is happening. Thingiverse link here, and here is how one version of it looks: 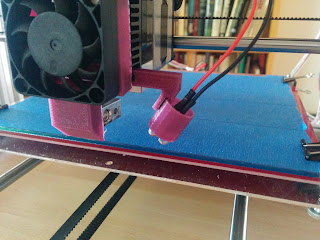 The Thingiverse link describes the electronics. In short, it is three clear LEDs and a 220 ohm resistor, wired to the 12V output of the power supply.

I protected the electronics in a couple of ways. I considered printing a box to put round the electronics. None of the designs I found were quite right, and some didn't print properly, so in the end I made some brackets which can be clipped together into a kind of cage: 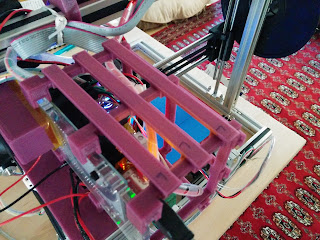 Here's the model for this one.

Lastly, I added a cover for the power supply and a power switch: 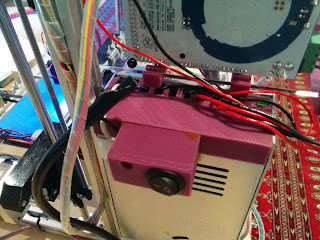 The cover comes from here, and the power switch box from here. I don't much like this switch cover. It has a single hole for a screw so it's not very solid. I chose it mainly because I had a pack of rocker switches the right size to fit it.

That's all for now. My next project will probably be a rebuild of the Y bed.
Posted by Moosteron at 11:53 AM

hmmm, if this is a double post sorry.
Might I trouble you for some assistance. I have also obtained this kit but am no engineer. could you describe how to attach and implement the LCD and can you tell me me what the diameter of the extruder nozzle is.
DC

The LCD comes with cables, one end of which plugins in to the back of the LCD unit, and the other end to the RAMPS board. On the RAMPS board, the connector is at one end, it should be obvious which. There are two connectors on the back of the LCD marked 1 and 2, and if you look very carefully at the connector on the RAMPS end you can see a 1 and 2 there as well. You might need to change the firmware to enable it - I didn't, but some people have had to. Search around and you can probably find details.

If you haven't found the forum already, I recommend going to http://forums.reprap.org/read.php?406,512329. There's a very helpful community of people there with lots of discussion of problems and how they've been fixed.

I appreciate the help. I will attempt the LCD tomorrow.
DC