I my previous post about triaxial tourbillons, I mentioned that I had built the Gyrotourbillon designed by Thingiverse user NOP21 (build, video). I've built a few other designs from the same person including a complex and beautiful escapement (build, video) and some intriguing gears (build). NOP21's designs are always careful and well thought-out. Their recent designs include a couple of kinetic sculptures (1, 2), and as this is something I've been getting interested in, I built the first of them.

Here's a couple of pictures and some video: 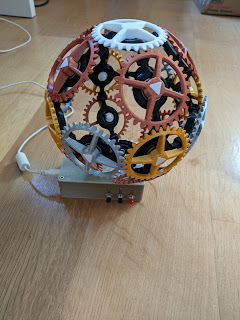 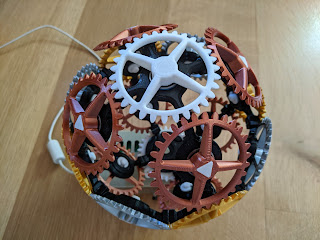 The filaments are Geeetech silver, bronze and gold silk PLA, Mika3D white and black PLA, and Sunhokey rainbow PETG for the base.

I've found that the tolerances for most mechanical designs off Thingiverse are too tight. The design was an exception. The frame elements (the black structural parts) didn't fit together tightly, and the bearings were also too loose to stay in securely. I made the bearings fit better by lining the inside of the opening for them with a sliver of blue tape, and I got the parts to fit together by gluing them. Usually cyanoacrylate glue works fine for PLA but in this case it didn't do a good job and I resorted to using a hot glue gun instead. This worked OK, though you have to act fast after applying the glue, which can be tricky in the stages where you need to fit several pieces together at once.

The original design used a motor like this one with a variable speed controller board. I though it would be interesting to replace this with a small stepper motor, the widely used 28byj-48. In combination with an Arduino Nano and a ULN 2003 driver board, it means you can program more complex movement pattern, such as a gradual change in speed or a reversing the direction. I designed a simple coupler to connect the frame to the stepper shaft and I also redesigned the base to accommodate the motor and electronics.

There are two other minor changes. The axles for the gears are designed to be printing lying on their side (axis horizontal). This entails some cleaning them up afterwards to smooth out the lowermost layers. I prefer to print them with the axis vertical. This doesn't quite work as the triangular end of the axles is not quite flat. It's designed to follow the curvature of the overall design. I flattened out the ends; you can't really see the difference unless you know to look for it. Secondly, I needed to make the washers for the gears ("rondelle A") thinner. As originally printed they were simply too thick and the gears wouldn't turn. Either 0.4 or 0.2mm worked better.

I wrote controller code which allows you to create a program made up of steps., each consisting of a move of specified duration and speed, followed by an optional pause. You can have several programs. The box design allows for three buttons, which I use for pause, faster and slower. When pause is pressed, the faster and slower buttons are used to step between programs or set up to auto-advance to the next program when the current one is complete. There are also some status LEDs.

There is a bit of wobble in the movement, especially at slow speeds and when starting or changing direction. I think this is due to the shaft coupler not being a tight enough fit.

The modified parts and code are available on request; leave a comment if you are interested. I'm not usually posting remixes on Thingiverse now as the site has become so difficult to use.

Thanks to NOP21 for the original design. I am thinking of exploring kinetic sculptures further and this was a good initial project, easy and enjoyable.

Posted by Moosteron at 3:07 PM