Printing and Remixing the A26 Clock

Several years ago, thingiverse user A26 published a model for a simple clock. I made one version of this in 2019, and was never very satisfied with it. Following from making Steve Peterson's clock recently, I decided to have another go at it, and to make some design changes to improve it. The first change I made was to adjust the tolerances on some of the parts. Several of them fitted together very loosely so that, for example, gears would slip on their shafts, and bearings come loose. I think this is likely due to variation between prints and slicers.

The most serious problem was in the design of the anchor. It uses a knife edge: basically a V-shaped pivot which rests in a groove. A gust of wind can make the pendulum swing about the vertical axis (if you see what I mean), and as I found with my original build, if you are clumsy as I am, you can easily knock it out of place entirely. I therefore redesigned the anchor somewhat along the lines of the Peterson clock, so that it is mounted on a 3mm shaft. This entailed extending the frame of the clock to allow extra room. The result is much more stable. I haven't yet tuned the timing of the clock or allowed it to run for a long time, but so far it seems to be working well.

Here's some pictures and video: 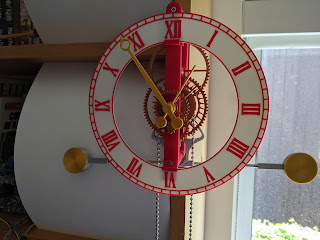 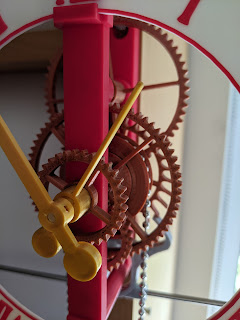 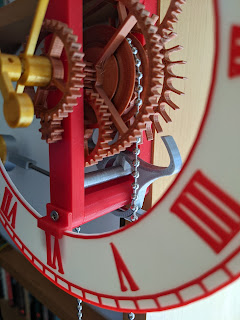 The filament is PLA throughout. Most of the parts are directly from the original design or my modifications of them (thingiverse remix), with the drum and ratchet from the self-winding version. (I started on adding the self winding mechanism, but got frustrated with it and gave up). The face also comes from this design, held on with some clips that I knocked together. I added a couple of small clips that slide tightly onto the pendulum shaft and help stop it from slipping. The main shaft and pendulum shaft are stainless steel, as I had pieces about the right length. All the other shafts are brass. I much prefer brass as I can cut it without power tools. I've been using this saw, which allows very clean and precise cuts with minimal effort.
To set the hour, the best approach is to hold the part called Wheel 4A stationary (see the original design for which this is), and turn Wheel 5. The shaft that connects Wheel 4A and 4B is snug but not so tight it can't turn. I glued the 4B end of the shaft in place. For the minutes hand, I hold Wheel 3 stationary and rotate the minutes hand on the shaft. The first time I did this, the hand broke, so I made a new version which is stronger. I am using about 200g weight.
Adjusting the beat (that is making the ticks and tocks of equal duration) and the timing (beats per hour) is difficult. For the beat you have to have the pendulum shaft exactly centered and the weights at exactly the same distance from each end. For the timing, you have to move the weights in or out on the shaft. Fine adjustment is tricky; the designer of the self winding version addressed this by threading the pendulum shaft and weights, but I am not able to do this.
Note that my change to the anchor means that you can't get the timing right. The clock needs to tick at 3600bph, and the slowest I could get was around 4400bph. This can be fixed by either using a longer pendulum shaft or modifying the pen weights so that they have a longer stem. I used both: the shaft is 250mm, and the longer stem pen weights allow for a bit more range of adjustment (not shown in the pictures above). The fine adjustment is tricky. What worked for me was to measure the beat rate with the Cuckoo Clock Calibration app, move the weight on one side to make the clock faster or slower, then move the weight on the other size until the pendulum shaft was horizontal. Towards the end of the adjustment, you may need to move the pen weights as little as 0.5 or 1mm, which can be hard to do precisely.
Another nice design - many thanks to A26.
Posted by Moosteron at 1:27 PM

Thank you for trying to build the self-winding mechanism. As some are starting to build this lately, I wonder what problem you encountered during construction? See if I can help. And maybe we (designer and builders) can learn from it. By the way, the summaries are super :)
Regards, krahut

Mostly, it was lack of time and wanting to work on some other projects. However, there are a few things which I saw as problems or which I think could be improved. First, the shell is very fragile and I broke it twice. You could make the walls thicker. The inner assembly is a bit tricky to print due to the need for support, and this could be improved by slicing it in two vertically and then gluing the parts together or having some small screws to attach them. (Incidentally, when parts are glued, I like to have several 1mm holes in them so you can use some pins to get the alignment right while the glue sets). The last thing is that there are several bespoke parts: the contacts for the batteries, the spring on top of the assembly. I would rather have seen off-the-shelf components. For the batteries, you could have used a 4AA battery box (a bit hard to find) or two 2AA ones. It would entail making the shell a bit bigger to fit it. You could also have used a single 9V battery, as the GA12 N20 motor is specified to work at 3V-9V. Again, the shell would have needed to be a bit bigger to fit it. I did start working on a redesign for several of these changes, bit did not have time to finish it.

I really like your design - it's very clever and a lot of fun to watch, so please take these comments as positive suggestions and not negative criticism!

Thanks for the feedback. I’d like to know which shell you printed, standing or lying version? What material was used? Where did it break due to what force? Layer split?

Originally I printed the standing version, it was the prototype. It did not seem fragile and no one else has indicated. But I uploaded a lying version to see if anyone likes the printed visible outer surface of the shell better.

The wall thickness is 1.2mm. That should be enough (I supposed). The shape itself stiffens the entire shell. It is not a load-bearing part anyway, it is not exposed to force. Just a "floating" cover.

Anyway I consider to upload a new „thicker walled” version…

I printed the standing version in silk PLA. I think it broke at the point where the thin shell meets the disc at one end. Perhaps all that is needed is a fillet here - it is where the highest stress concentration is.I didn't break in use, it was when I was putting the parts together to check for fit (I think - I don't remember exactly).