Brian Law is a British designer of clocks. Most of his designs are intended to be made out of wood, and he sells plans for them on his site, woodenclocks.co.uk. He has also adapted a few of the designs for 3D printing. There is a simple beginner's design, and three designs which are more interesting mechanically. I decided to make his Clock 27 design. This is a weight driven clock with a pendulum, and the interesting feature of it is that is uses a novel escapement, designed to minimize friction. A blog post explains how the escapement works. I like the design and found it fairly easy to get it running, with only a few issues. I do think there are a few ways in which it can be improved to make it easier to print and assemble. I'll come back to these in a moment, but first some pictures and video: 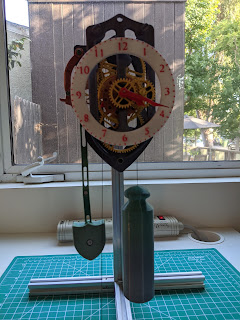 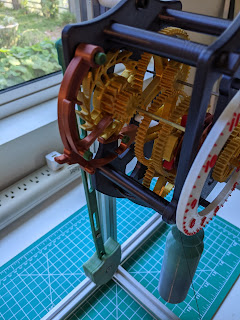 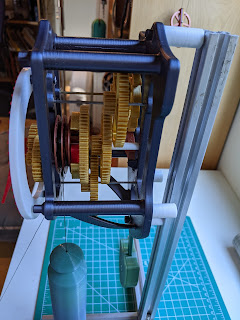 The clock running:
And in slow-mo. Make sure you have the sound on for this.
When I first assembled the clock, it would run for a few seconds (20 was the longest) before stopping. The pendulum was not swinging enough to keep the clock going. I tracked this down to the gravity arm, the piece on the left shaped like a crescent moon. The blog post says that "The finger on the end of the Gravity arm needs to be adjusted so that it causes the trigger to release the Escapement wheel just before the fork in the fork in the Lifting lever [The L shaped piece] reaches the curved tooth", and this was not happening. As a test, I stuck a small piece of plastic on the tip of the gravity arm. The clock then ran, though a bit unevenly. I reprinted the gravity arm with the tip extended by 1mm, and took the chance to check over and clean up all of the remaining parts, and after that it ran smoothly.
Brian Law has several parts that are to be printed separately and glued together. For his version, he used ABS, and there are plenty of effective solvent glues for it. I used PLA, where the only glue that works well is gel cyanoacrylate. It requires the surfaces to be smooth and quite close fitting for the glue to hold. One case where it is suggested is to assemble parts like this: 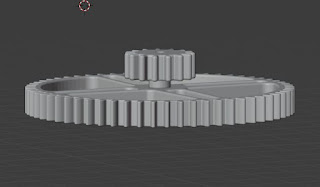 There are two gears here, the big 60 tooth one and the smaller 15 tooth one. They are printed separately because of the overhang and then joined into a single piece. A single part this shape would otherwise need support to print. I found the parts did not glue well together as there is a fairly large gap around the mating piece (which is part of the upper gear). One way of improving this would be to make it a tighter fit. A better way would be to make the mating piece and the hole it goes into hexagonal. And best of all is to extend the teeth of the upper gear down and then merge the pieces into a one that can be printing as a single entity, like this: 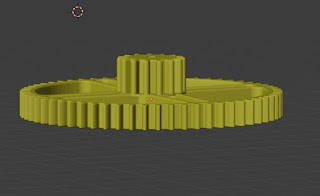 This is the solution I adopted. I did glue some of the pieces as recommended, for example the wall spacers on the back of the frame, but also found a few more places where it was easy to modify and then merge the parts.
The clock relies on some of the gears being tight on their shafts, and the design undersizes some of the holes so they can be carefully drilled out to fit the arbors. In most cases, you could get away with a looser fit and extra spacers as an alternative. The one place where there has to be a tight fit is the 60T gear which mates which the ratchet. It directly drives the shaft it is on and thereby the minute hand. I found it was too loose at first, and so tightened the interior hole as well as adding a couple of hole for M2 set screws. This seemed to work; even without the set screws the fit was tight enough that I had to tap the rod with a small hammer until it was in place and the screws are only there in case it loosens up over time.
Note that there is an error in the bill of materials for the clock. Instead of needing three 100mm shafts and one 69mm one, it actually needs one 100mm and three 70.5mm; similarly, you need one 31mm shaft, not three. I used several different materials: stainless for the 100mm, carbon steel (McMaster Carr High Tolerance Rod) for two of the 70.5mm rods, and brass for the remaining one. This was based purely on what I had available. Brass is my preference as I can cut it with hand tools, unlike stainless, and it doesn't corrode. The carbon steel corrodes a little, and as I live near the ocean this can become a problem over time.
A few of the parts are on flying shafts (I mean ones which are only held at one end). Law suggests adding a magnet to keep them in place. I prefer a simpler solution: make the shafts slightly longer and print a tight fitting cap for them. Take a look at the second picture above for some examples.
One other issue I encountered is that once you have attached the dial to the frame, two of the screws which hold the front of the frame to the back are inaccessible.
Before I modified the gravity arm the beat was very patchy and I worried that this might be due to uneven teeth on the gears. However, once I made the slightly longer gravity arm, it ran evenly. It has met my basic test (running for 1 hour). I have yet to tune the timing and as you can see in the pictures it is still mounted on a test frame rather than on the wall.
Where next?
This is the fourth clock I've made recently, each based on a slightly different principle: hanging pendulum, seesaw pendulum, balance wheel, gravity escapement. It's not that I especially love clocks, more that I just find it interesting to make them and then get them working, and I enjoy finding complex printing projects. There's a few more designs I will probably try out. I don't leave most of them running: if I want to tell the time, there are plenty of much more accurate electronic devices within easy reach. The only one that I do leave going all the time is the Peterson clock, in part because it runs for 7 or so days without rewinding. It has stalled a couple of time in the last few days after a few weeks of working well, so some maintenance might be needed.
A footnote
A day after posting the above, I moved the clock from the testing frame to a permanent position on the side of a bookcase, and found it didn't run for more than about 45 seconds. I think this is just that it was not balanced. It took a while, but after slowly adjusting the angle it was hanging at and also adding a washer to the gravity arm to give it a bit more momentum, it seems to be running better - at least two hours without stopping.
Posted by Moosteron at 6:00 PM