I've had the printer, now dubbed moosebot, working for about a week now. The quality of the prints varies quite a bit. In general I am happy with them, though there is still tuning to do. So here's a gallery of some of the successes and failures so far (some repeats from the previous post).

The first few cubes. The little Giacometti scribble above them was the first output I managed to get from the extruder after struggling with it for a while. Then solid cubes at various temperatures. 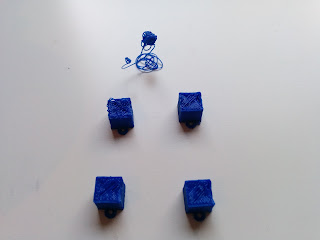 Some thin wall cubes, first with the sample filament, and then with the roll I bought which I think is better quality. 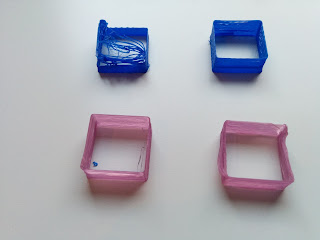 More test cubes, as I experimented with temperatures, infill percentages and layer thicknesses. 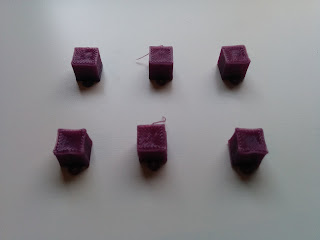 Bigger test cubes. The one on the right was one I abandoned. It was using 0.2mm layers and it didn't stick to the bed. My first prints were at 0.4mm, and most of them since then were at 0.3mm. I plan to go back to 0.2mm. I think also the blue painter's tape on the bed was getting worn out by this point. 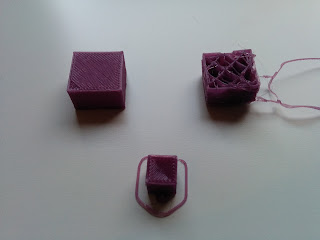 Various thin test slabs while I was trying to work out why the prints weren't sticking, and also why a small part of the top layer of every print was missing. This came down to needing a "M400" command to flush the buffers before moving the head away. 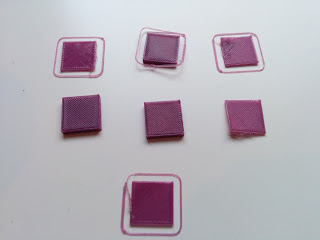 A couple more calibration objects. The lower one was printed standing up on the small square end. The edge is ragged. I'm not sure why. 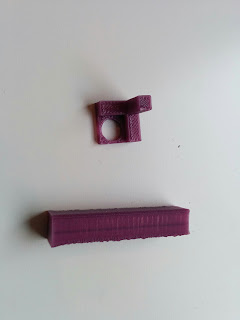 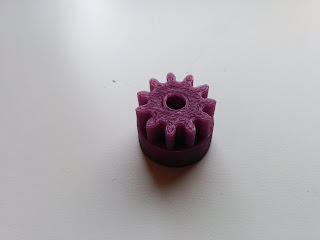 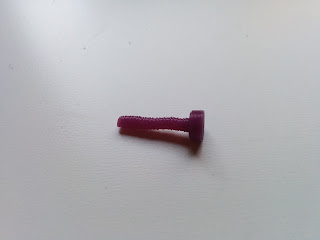 A baby Dalek, printed at 0.4mm. Very ragged, but cute. 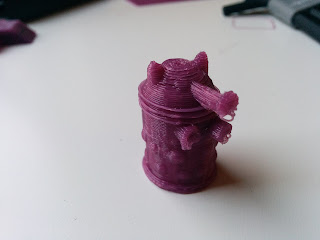 This is a design for a fan should to blow air onto the piece as it prints. Neither way round works very well, and I've read on the forums that it hasn't made much difference. You can't see it well here, but on one the corners lifted a lot, and on the other a bit less. I'm printing at 185C, with 195C for the first layer, and in the one where the layer lifted less, with 0.35mm for the first layer. The other layers are at 0.3mm. 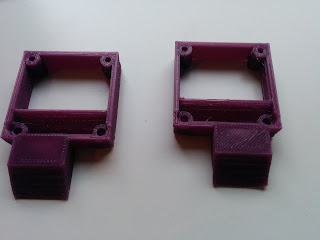 Another fan shround. The extruder heat sink is supposed to go in the middle. Unfortunately, it doesn't quite fit. Same temperatures as the previous one, with a 0.4mm first layer. The corners still lifted slightly, but less than the previous ones. This is my longest print so far, taking just over an hour. The X and extruder motors were pretty hot by the end, while the Y and Z ones stayed OK. 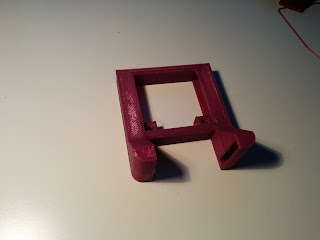 Posted by Moosteron at 6:27 PM