Step 9: attach the motors; 20 mins. This was easy. I noticed the Y axis motor was labelled 5.3 kg/cm, while the instructions say 4.8. Maybe this will have implications when it comes to setting the driver voltage.

Step 10: assemble Z carriage; about 1 hour and 10 mins. Step 10 was by far the hardest stage so far, both in following the steps and more particularly in the physical force that was needed. There is one error in the parts list: it says 4 M3 nylock nuts, when only one is needed. Getting the bearings into the the end pieces took quite a lot of force. As recommended, I pushed them down hard on a table. The second bearing was easier than the first. On the forums, one person commented that the bolts for the motors were too long. I found there was a tiny amount of play after attaching it to the right side piece, but not enough that I am worrying about it.  For fitting the F623ZZ bearings to the left side piece, it's important not to overtighten the bolt or the piece starts to distort.

Then I got to the stage where things have, for the first time, gone wrong. You have to fit three bearings to the extruder carriage. Two are colinear, and one of them would not go on completely flat, even with a lot of force and when I gently squeezed it in a vice. When I was checking if they were close enough by running a chrome rod through the bearings, I knocked a shower of tiny metal balls out of one bearing. Surprisingly, the carriage ran OK on the chrome rods, as well as the Y bed did. I may come back to this later and replace the damaged bearing. Maybe a printed one like this would do (and this might make the Y axis smoother).

Next, after fitting the end pieces to the chrome rods, you have to squeeze it so they are 300 mm apart. This takes a ton of force, and I got it close (303 mm) and then couldn't get it any further. I eventually rested on end on the floor and pushed down with a lot of force. It jumped down to about 295mm, and I was then able to expand it back out to 300mm.

Fitting the belts was OK. After the initial fitting, the carriage movement was very stiff. I slacked off the grub screws on the 20T pulley, then did them back up again, and things were good after that.

Some pictures for this step. From top to bottom, here are the right end, carriage and left end in case you have difficulty telling which is which: 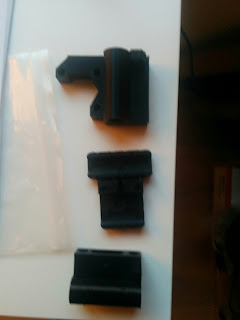 And a few pictures of the assembled components: 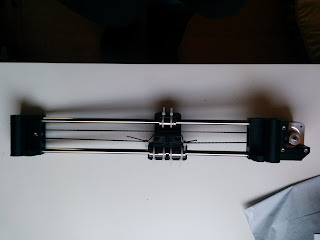 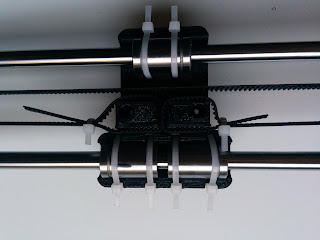 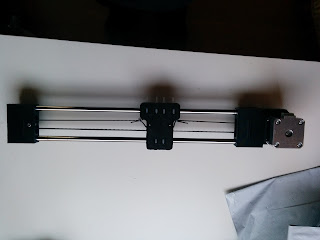 Step 11: attach the extruder; about 20 mins. Almost easy: the main thing is that getting both bolts into the motor was a little hard. I think the spacing of the holes in the extruder carriage was a little short.
Posted by Moosteron at 8:35 PM