Many of the mechanical and constructional parts that I have printed have not come out right. In particular, holes for screws and the like have been too tight, and I've needed to change the model or the printer settings to get them right. In this post, I'll describe some experiments on how different parameters affect this. This is all to do with static parts - can you get a bolt on a hole or onto a thread, for example. I aim to return to the subject in future and look at moving parts such as gears. I have been somewhat systematic, though this is far from being a scientific exploration.

Warning: this post is boring. Sorry, that's just how it is.

The areas I want to explore are:
I did most of the tests using a M3 bolt and nut. I made an cuboid of about 3mm thickness, and put several circular holes and hexagonal holes in it. To get the base sizes right, I downloaded CAD models of bolts and hex nuts from McMaster-Carr's web site. I then scaled these and used Boolean modifiers in blender to either cut holes in the cuboid or merge them with it. The result looks like this: 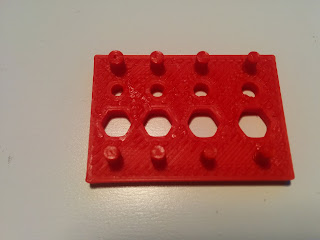 The four extra cylindrical shafts are for another test that I decided not to follow through with.

The base size for the circular holes was M3 (3mm diameter), represented in blender as a cylinder with 32 sides. The other three holes used this scaled up by a 1.1, 1.2 and 1.3. The hex holes were made by using a 6 sided cylinder in blender, set to the same size as the CAD model of a hex nut. It was scaled by 1.05, 1.1 and 1.15. Note that I didn't expect anything to fit in the base size (scale 1) holes. They are just for reference. The bolts were scaled down by 0.95, 0.9 and 0.85. I picked all of these scale factors after some initial prototyping.

After printing, I tested the circular holes by inserting a M3 bolt into them.
Circular hole ratings:
The difference between C and D is a bit subjective. For most things that I make, I would want a C or D.

I tested the hex holes by fitting a hex nut into them.
Hex nut hole ratings:
I would want J or K, depending on the application.

For testing the screw thread, I tried threading a hex nut onto it.
Thread ratings:
Rating R is what we want.

Most of the tests were done with PLA from justpla. It's a cheap brand but has worked OK.

In the test results, I will quote the results of the experiments as the rating for each of the four circular holes, the four hex holes and the four threads, with the desirable values in bold.

The layer thickness could make a difference. I would not expect to see much effect from this except possibly on the thread test, where the vertical resolution matters. The prints were at 100% infill.
There is some variation with layer thickness, but not very much.

For all the remaining tests, I used 0.2mm 100% infill, the first line on the table for experiment 1. I did one test with less infill. It's conceivable that the pressure from the 100% filled body could press in and shrink the holes. So here are the results with 30% infill.

Infill makes a difference to the first test, with no effect on the others.

I have read on the RepRap forums that changing the extrusion multiplier in the slicer settings is a common way of overcoming holes that are too small. For this test, I reduced it to 0.85.
This makes a small difference for both hole types. The "S" ratings for the thread means that the nut didn't engage with the thread in the slightest, more extreme than any of the other tests.

I usually use Slic3r, and for one test I tried Cura. The results of this test shouldn't be taken too seriously, as I have not tuned the Cura settings. There are no results for the thread test, as the print had no usable results.

Lastly, I tried some other materials I had lying around: a PLA/PHA hybrid from Colorfabb, PETG, ABS and a different supplier of PLA. The ABS results are partial. I rarely print with it, and the piece curled during printing. There are no thread results from the ABS test.

Experiments I did not run: print speed, nozzle diameter, temperature. All of these would be interesting to explore. Print speed, especially - the other two are likely to be constrained for other reasons.

It's hard to conclude much from this, and I think that is interesting in itself. I expected more variation with material, as different plastics allegedly shrink by different amounts. The infill and extrusion multiplier are the most important ones, as you have more opportunity to control them.


Recommendations when you are designing an object

Suppose you are designing an object. What should you do? These results suggest for interior holes you should make them a bit bigger than the nominal size. A good general factor is 1.2 for circular holes, and 1.1 for tight fitting hex nut holes or 1.15 for loose ones. For threads, scale them down to 0.9 of the nominal size.

Recommendations when you are printing someone else's designs

If you are printing someone else's design and the holes are too tight, you can reduce the infill or the extrusion multiplier. The second is better and gives you more control, but it may make threads unusable.

Do the results generalize to other sizes?

All of the tests so far were based on M3 parts. What about M4, as an example of another size? There are two possibilities here: you could scale pieces by the same factor I used above, or you could change their size by the same absolute amount. Here are results (with the M3 result repeated for convenience). Due to an error, I am missing the thread results for the absolute case.


The "S" on the M4 scaled line was very, very loose. So this implies both the scaling and the absolute change have a much larger effect than with M3. This is annoying, as it means if you have a design, you might need to make different adjustments for different size holes.

Posted by Moosteron at 8:40 PM

Hey, I really enjoy reading your blog posts. I am working on the Folger Tech 2020 right now. Do you use Repetier Host? What do you set you federate and flowrate to? Thanks!

I am actually posting a build log on the Flite Test forums that can be seen here.http://forum.flitetest.com/showthread.php?22307-Folger-Tech-2020-Prusa-i3-Build-Log

I do use Repetier host, with Slic3r. I don't recall what I have the feedrate and flowrate set to - I've not changed them directly, though I have tweaked the speed from time to time.

Good luck with the build. There is a great (and very long) thread on forums.reprap.org about this printer.

Unknown said...
This comment has been removed by a blog administrator.
5:39 AM

Anankafasteners said...
This comment has been removed by a blog administrator.
1:21 AM

SPSteels said...
This comment has been removed by a blog administrator.
4:13 AM