Since the previous post, I've made a slight change to the circuit I use, and written code for getting the DAC to generate various waveforms. The circuit change is a simple one: connecting the -LDAC pin of the DAC to output 8 of the Arduino. The function of this pin is that it causes changes in the input to only be reflected in the output when it is pulled low.

After experimenting with various options, I decided to write the code in an interrupt-based version. It uses an internal timer of the Arduino to call an interrupt routine every N microseconds. The interrupt routine just increments a variable for how many time it has been called, and in addition if a new value is ready for output, it pulses -LDAC to make it take effect. This means you can do the calculations for the next value to output without needing to worry about timing, then send the new value to the DAC ready for the next timing interrupt.

Lots of code follows. It will generate square, sawtooth, triangle and sine wave output. It's pretty limited: square waves only go to 10kHz reliably, and the other waveforms to much lower frequencies, the exact value depending on the number of samples you ask for. Too many samples and some will get skipped, or you get timing jitter. The sine wave is the worst, though it could be considerably improved by getting the values from a lookup table rather than the sin() function. If you want to see how to do this much better than I did, take a look at http://www.instructables.com/id/Arduino-Waveform-Generator/?ALLSTEPS, a really nice piece of work. I also used this code as an excuse for coding closer to the hardware, for example setting output pins by writing to the ports rather than using the digitalWrite() function. I also made some use of types such as unsigned long to get better precision in the calculations without resorting to floating point calculation, and unsigned int for many of the other variables. You have to be quite careful when coding this way, and use casts to avoid truncating values early.

(Code formatted using http://hilite.me/. It does a nice job. I'm not sure I like including code as opposed to giving a download link - opinions welcome, should anyone actually be reading this :-))

Posted by Moosteron at 5:40 PM No comments:

I've been thinking of building a signal generator based on an Arduino and a DAC. As an experiment, I got hold of a MCP4921 12-bit SPI interface DAC. Connecting this up to an Arduino is really simple:


My first question is how fast you can drive this. It's limited by the capabilities of the DAC and how quickly the Arduino can send data to it. The datasheet says that the MCP4921 takes about 4.5uS to settle, and to see how fast I can make the code go, I wrote a minimal sketch that toggles between a high and a low value. All values in the code are constants and there are no function calls other than setup() and loop(). So the code looks like this:

Looking at the output on a scope, the first thing to notice is that it isn't square: 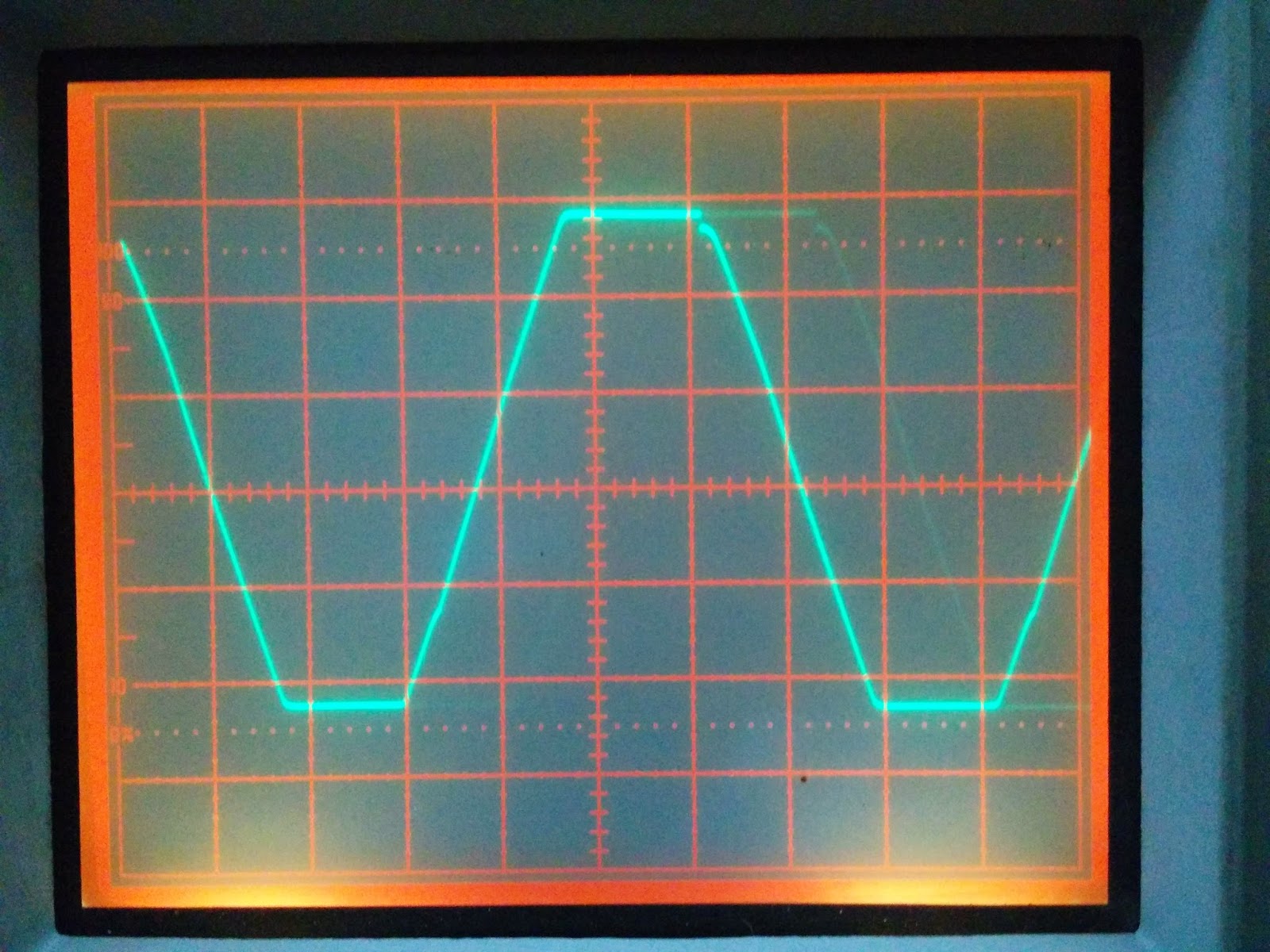 The timebase here is 5us per division, so the rise time is worse than the settling time of the DAC would suggest. It shows that the minimum time for a cycle is about 31us, so limiting the frequency to around 32kHz. For anything other that square waves, you would need multiple steps, further reducing the effective frequency. The frequency seems consistent with this project, which is working with 22kHz samples. You might be able to squeeze a little but more by running the SPI interface faster, using SPI.setClockDivider(SPI_CLOCK_DIV2) in setup(). This does make a difference, but a tiny one.

Posted by Moosteron at 5:02 PM No comments:

Many of the interesting ICs you can get only come in surface mount packages like SOIC or TSSOP. For example, I was looking at this interesting device only to find there is no through hole version. These packages are physically much smaller than through hole ones, and as it's already hard to see what I'm soldering with my aged eyes, I had more or less given up on them. But all is not lost. I bought a simple headset magnifier from Digikey for $10, and it is good enough for me to work with these packages and even with the teeny tiny capacitors and resistors that go with them. For learning surface mount soldering, Jameco have a kit and a video (by someone who is really irritating, but useful all the same). Here's a small 555 circuit from the kit: 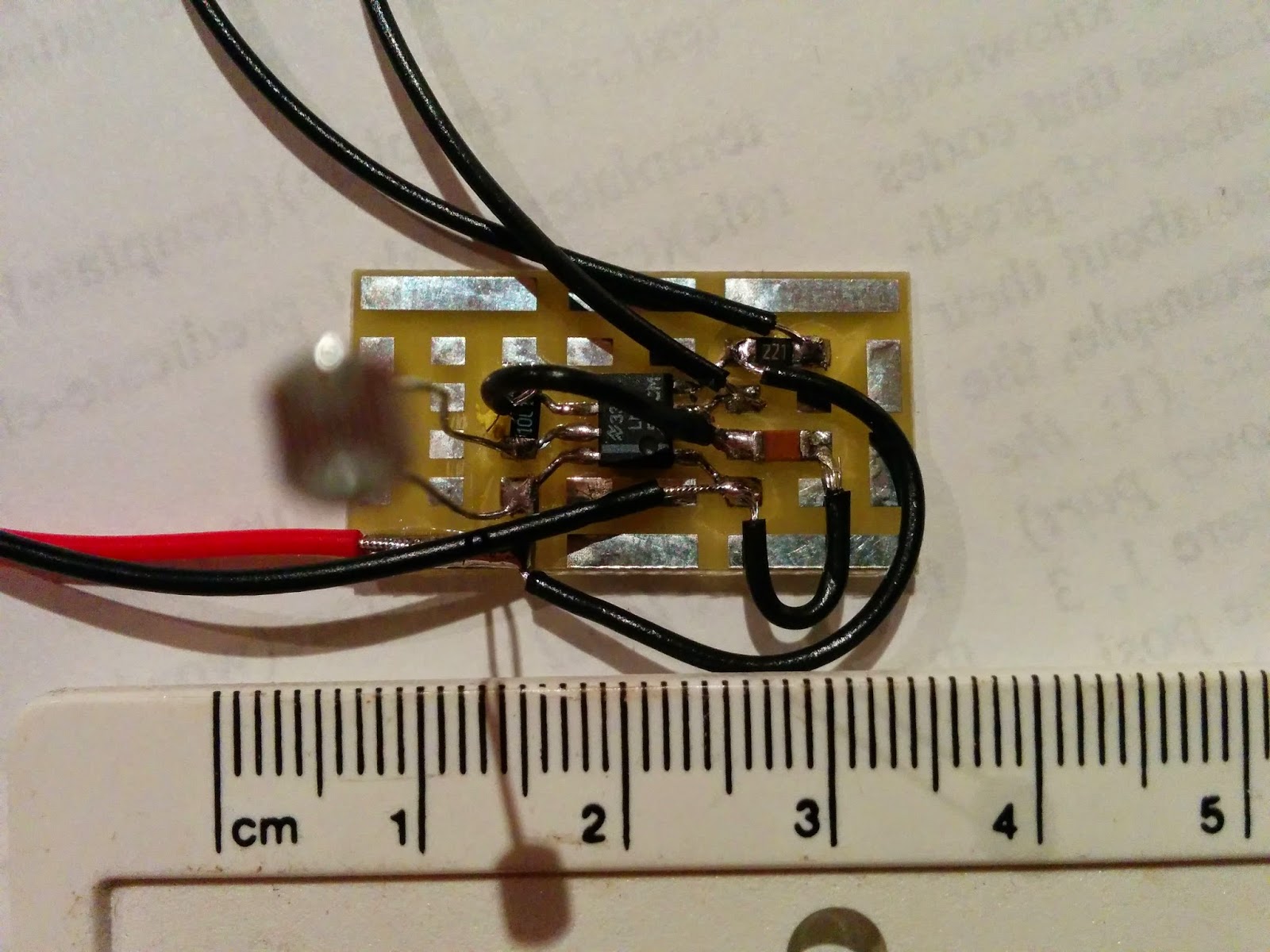 Not pretty, but it works. Here what the headset magnifier looks like: 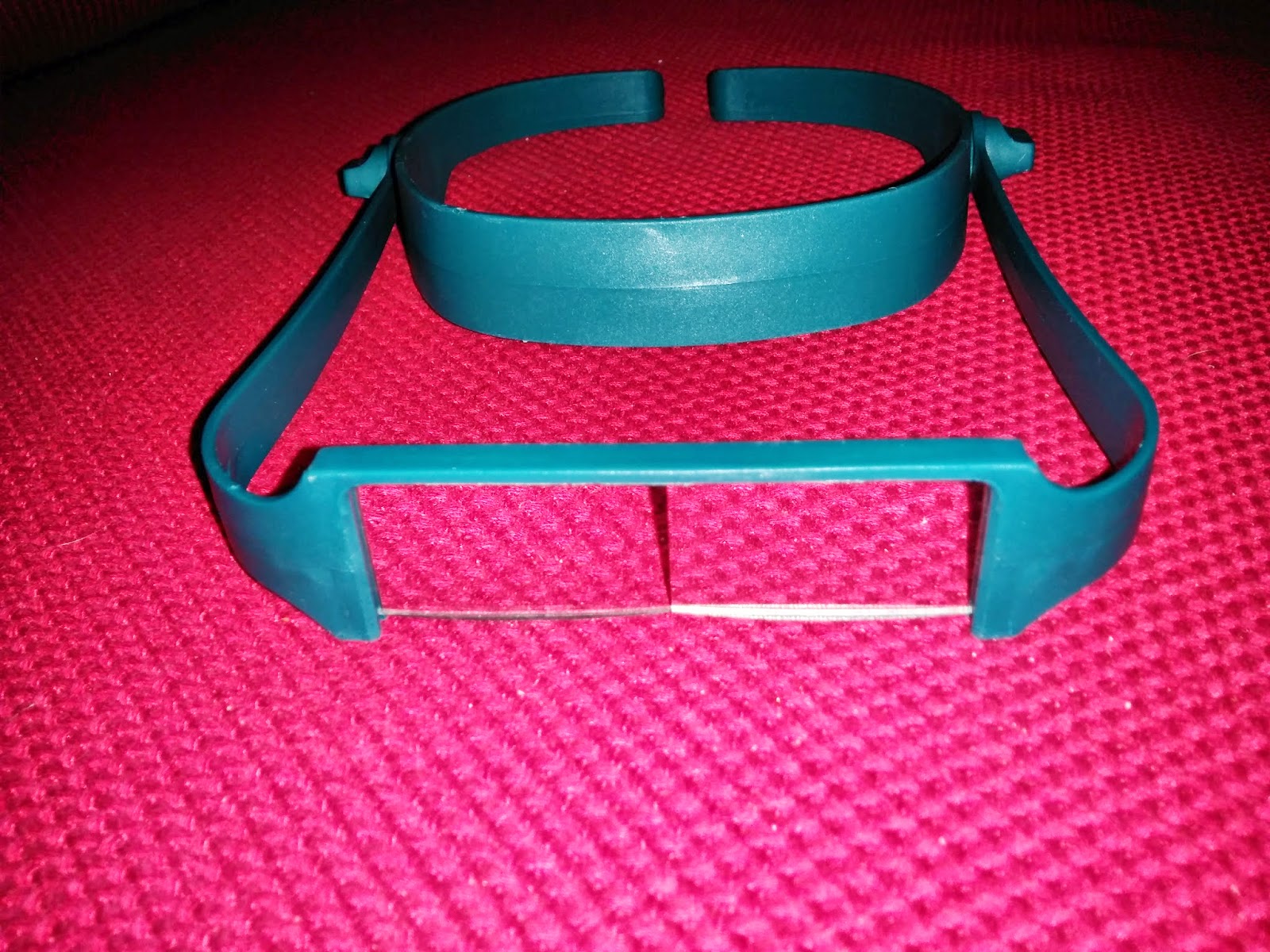 This is not to the same scale as the picture above, just in case you thought my head was 4cm in diameter.

Posted by Moosteron at 8:41 PM No comments:

A few months back, when I was starting to get interested in building electronic circuits again, I thought it would be useful to have an oscilloscope. I came across several web pages describing how to use the headphone/microphone socket on an Android phone with some open source software to make a really cheap scope that would work at audio bandwidths. Based on one of the pages (which I can't find now), I knocked up a 10:1 probe consisting of a FET, a capacitors for uncoupling the DC and some resistors. I tried this with a couple of programs: OsciPrime and XYZ-Apps Oscilloscope, running on a very old Nexus 1.

I connected it up to a small, fixed frequency oscillator with sine, square and triangle wave output, this Velleman kit. Here's how the sine wave looks on OsciPrime:

If you can tell from the out of focus photograph, it looks OK.

As you can see, it's different from the sine wave, but far from triangular.

Here is the alleged square wave: 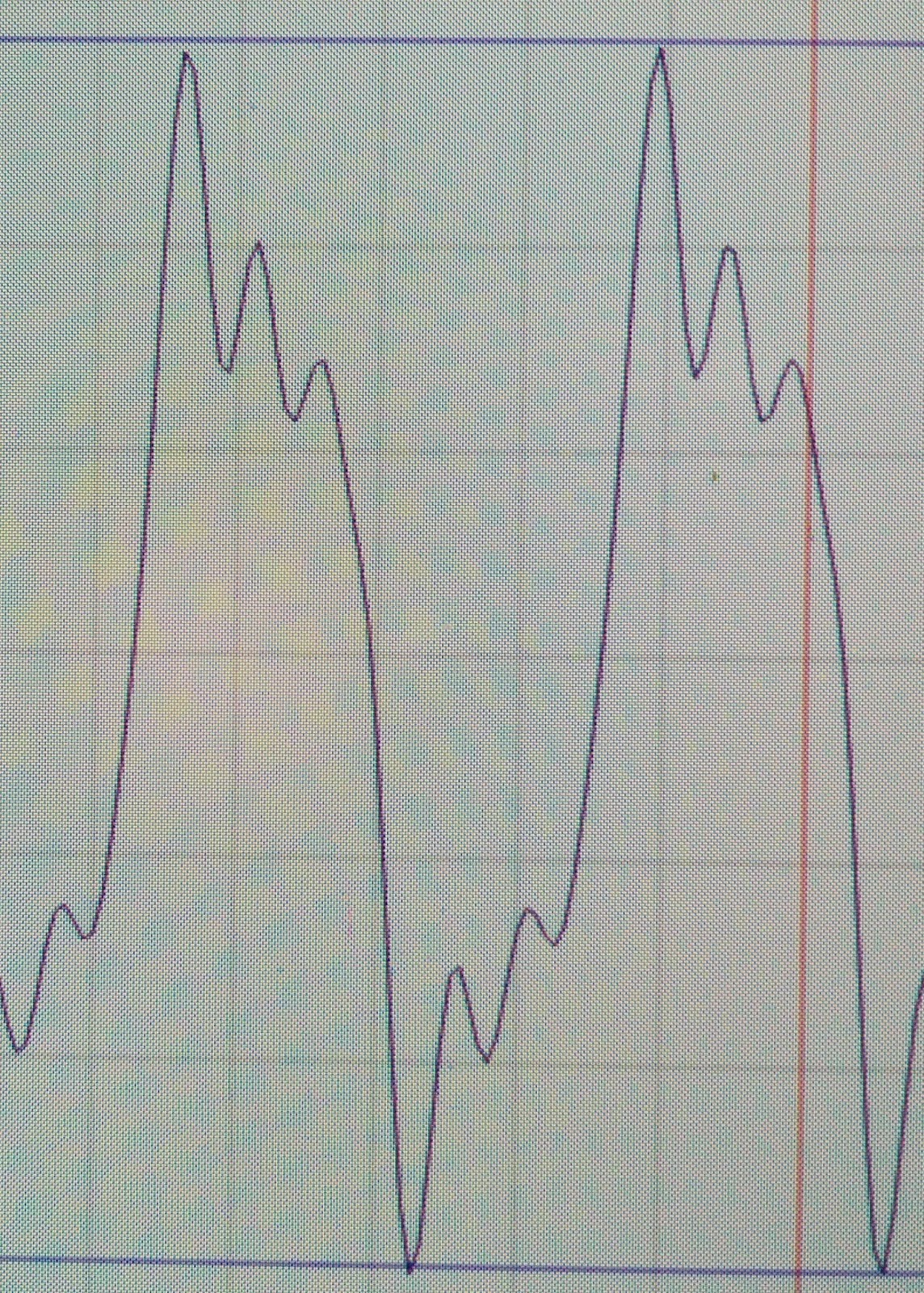 This is surely the most horrible square wave in the world. And it's strange as well. If it was just losing the higher harmonics, you would expect each pulse to be symmetrical in time.

Many months later, a kind friend made me guardian of his old Tektronics 465 so now I can see what the Velleman signal generator is really producing. Here's the square and triangle waves: 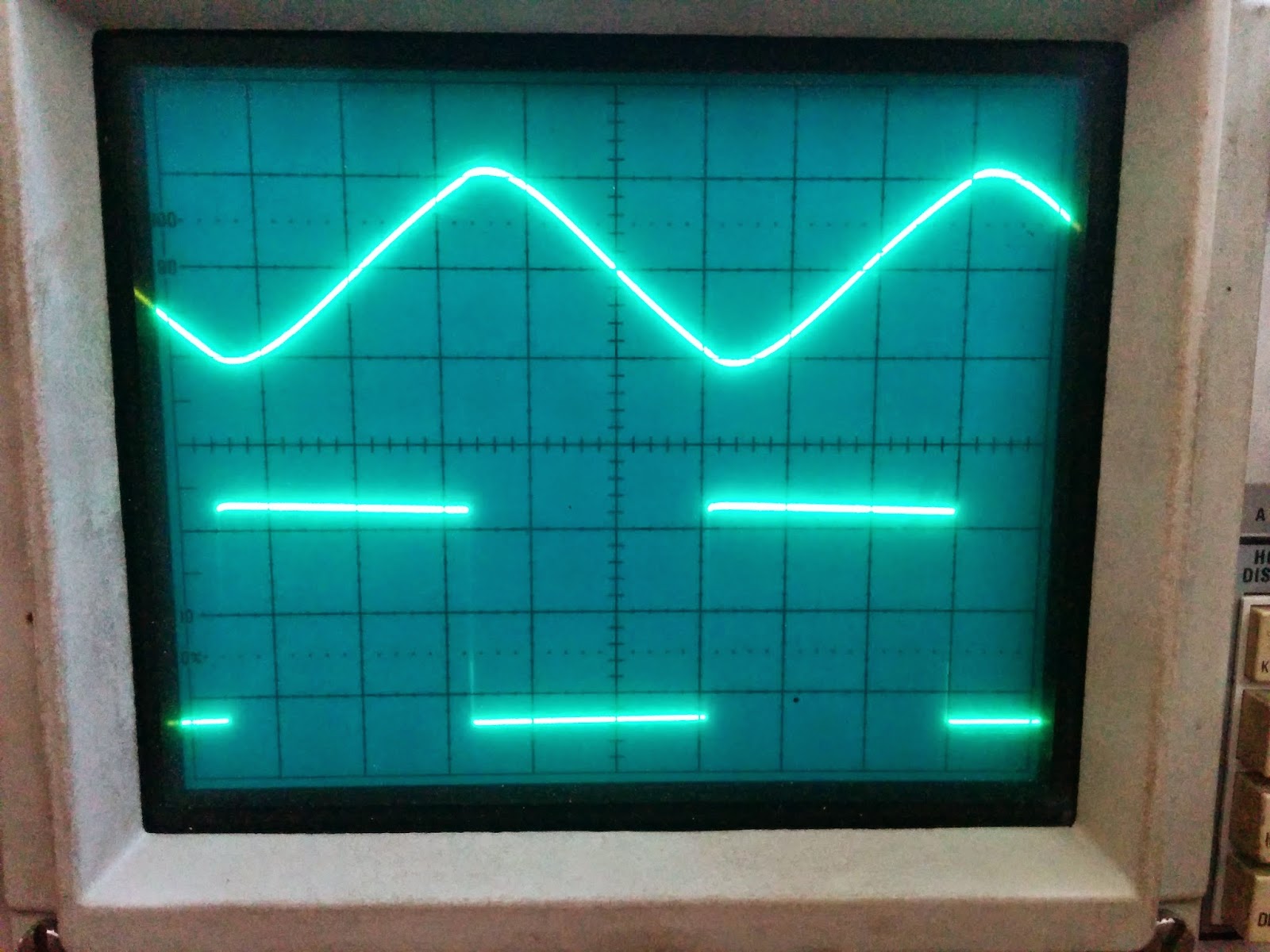 You can see the square wave is pretty clean (as you'd expect - the circuit is a 555 and a filter network to remove the harmonics). The triangle wave is a bit soft edges, but is also noticeably more symmetric.

So what was going on with the square wave and to a lesser degree with the triangle wave? Based on some simulation, I think it that as well as losing the higher harmonics, there is a phase shift on the remaining ones, and the shift is different at each frequency. 45 degrees on each of the odd harmonics results in something close to the observed square wave. I assume the Androids audio circuitry or the software behind it does this. I wonder why.