Recently, I was printing a frame with a tall arch shaped part to it. The designer of the object  provides a version with built in support and one without. If I allow Cura to generate the support for the one without, the printing time is a lot less, so that's what I went with.

It was all going well until the support detached from the build plate. The printer then merrily continued, dumping the support material into thin air, where it gradually turned into a big pile of print snot. It is complete coincidence that I was using a green filament. 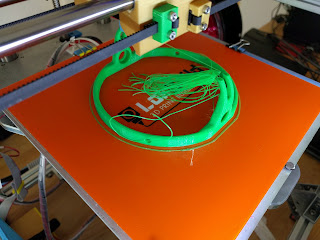 I trimmed away some of the slot and let it keep going. Amazingly, after a while, the printer managed to re-establish a bridge across the arch with a few layers of support to go, and get to the end of the print. 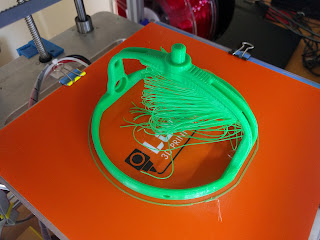 Here's the print with the snot that I trimmed away and the support that came loose. 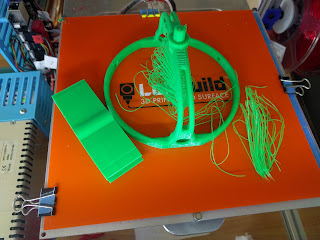 After removing the support and the rest of the snot, the results are a bit ugly, but not too bad. 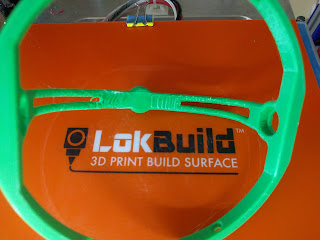 Recent versions of Cura have an experimental feature where it selects different layer heights according the slope of the model. As the slope changes from vertical to horizontal, it uses a lower layer height to get better shaped prints. Imagine a dome, where the later height gets smaller as it reaches the top, and you'll get the idea.

I have a piece that I wanted to print where I wanted most of it to print at 0.2mm or 0.3mm to keep the print time down, but wanted a small vertical extrusion to print at 0.1mm for strength and precision. As the extrusion is vertical, this won't trigger the adaptive layer heights.

A simple solution is to add a second object which has a dome at the same height a the extrusion. As the same layer height is used across all the objects, the low layer height needed for the dome also applies to the extrusion, while the remainder of the model prints quickly. Here is a screenshot from Cura to illustrate what I mean. I know it's a bit tiny; for a bigger version, look here. In short, the dark blue is 0.1mm layers and the yellow is 0.3mm. 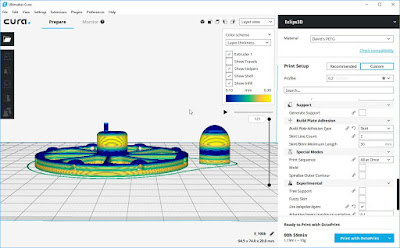 Posted by Moosteron at 9:51 AM No comments: