The Swingtime clock is a design by Clayton Boyer. I previously made his Toucan clock. Like the Toucan, the Swingtime is designed to be made out of wood, and I adapted it for 3D printing. I highly recommend watching this video to see how it works.

It's a large clock and this posed some challenges. The main wheel is slightly too large to print on my Prusa MK3S, and so I split it into two pieces, using the technique I described in a previous post. The hourglass-shaped pendulum itself is about 60cm from one end to the other.  For this, I printed the center and the two ends, and then joined them together with wooden dowels. One end was still too large to fit the print bed, and so I also split it into two pieces. Finally, the frame is again too large. I found that by reducing it to the minimum size needed, roughly the distance from the escape arbor to the main arbor plus a little extra, it will just about fit diagonally on the print bed. Very long straight objects with a low contact area are one of the hardest things to print without warping. I got lucky and there was only the tiniest lifting from the bed at one end. The whole thing is mounted on a stand of 2020 aluminium. I have lots of this lying around from previous printers, and while it's not as elegant as a wooden stand it does the job. One concern I have is that the very top of the frame is unsupported and the escape arbor sags slightly as a result. I think it's OK, but it will need to be watched over time. I don't recall the amount of weight in pendulum bob, except that it was a lot less than the 140g suggested in the original design. I used some BBs, glued into the bob with wood glue so that they don't shift as the pendulum swings; it doesn't the operation if they do, just makes a slight noise.

Here's a few pictures and some video. 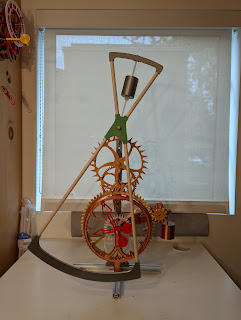 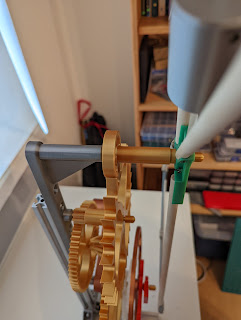 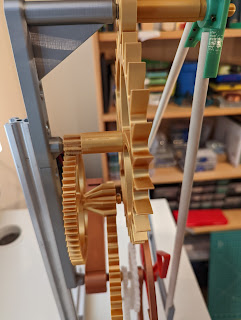 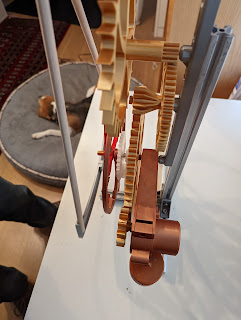 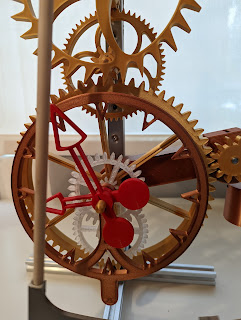 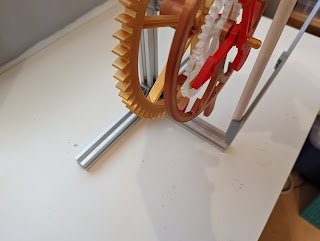 The original design uses a daisy wheel for dividing the minute rotation to the hour rotation. I used this in a previous clock, and I don't much like the motion it gives. As I noted in the previous post, there are two variants of the daisy wheel design. Clayton Boyer's design uses what I think is the less good one, as it causes the hour hand to move eccentrically. You can see the tip getting closer and further away from the clock face as it rotates. You can see this in another build of the clock, around the 2:50 mark. The daisy mechanism can also give a non-uniform movement in the sense that its angular speed changes as the minute hand advances. One alternative I considered was to use Ferguson's mechanical paradox, as in the William Strutt epicyclic clock. However, after trying several prototypes, I was still unsatisfied with the smoothness of the motion from it. In the end, I used a very conventional 3:1 and 4:1 gear train between the minutes and the hours. It floats freely on the back of the clock face.

The arbors are 5mm brass, with a 6mm brass tube for mounting the assembly containing the clock face, hands and minute/hour reduction. Each arbor has a small cap. As well as improving the appearance, it stops the gears from gradually sliding forward on the arbors. This was definitely necessary for the third wheel. The pallet rests on has two MR105, chosen because I had some in my parts stores from a previous project.

The clock is driven by a weight attached to an arm behind the minute gear. The arm contains a motor and a tilt switch. When it drops below a certain angle the motor engages and move the arm up a little. I didn't quite believe that this would work until I saw it happen: why doesn't the force of the motor just drive the minute wheel round rather than raising the motor arm? I think it's that there is enough resistance from the rest of the mechanism, or maybe the escapement is locking everything in place for the short time the motor runs. Or maybe I just don't understand physics. I found that the motor sometimes moved itself up then dropped back down again, similar to what you can see in the first few seconds here (same video as before). The comments thread for that video mentions that Clayton has a modification using a detent to stop this. I had considered something similar. An alternative is to add a capacitor to the motor. This charges up while the tilt switch is engaged and then keeps running the motor after the tilt switch turns off. The motor arm then lifts up a bit further until the capacitor has discharged. It has two beneficial effects: the motor arm raises further so it is longer before the motor has to run again; and as the charge on the capacitor decreases, the motor comes gradually to a halt, which seems to make it hold better. I used 4700uF. The tilt switch is a miniature kind, from here, and the motor is this one. The distance the motor travels on activation is very variable, anything from moving the motor arm through about 10 degrees to as much as 45 degrees.

If you look at the end of the video, you can see the remontoire going mad, and driving the motor arm until it collides with the third wheel. At first I though this was because the capacitor was too large, but I now think it was due to the tilt switch getting stuck. The switch contains a small metal ball which joins the contacts, and it's possible that I slightly squished the casing causing the ball to get stuck. It doesn't do this every time, for example the first time I saw it was after a couple of hours, and it clears after a short time. I'm currently trying a replacement tilt switch to see if it helps.

I like this clock a lot. Clayton's designs are elegant and work well. It looks wonderful and the broad slow swing of the pendulum is lovely to watch and listen to. I'm also emboldened to try some large designs that I would previously have rejected.

Posted by Moosteron at 11:03 AM No comments: