Last notes on the clock design

It's been a while since I wrote anything more about my prototype clock. I haven't been working on it much.

There are a couple of changes since the last version. I reorganized the orientation of the gears to space them out a bit, so that there is less chance of them rubbing. I also replaced the previous ratchet with a gravity one. The original ratchet used very thing springy pawls which had a tendency to break off. I replaced this with an arrangement similar to the one used in Favre's clock 24, in which the pawls simply drop into place as the weight drum turns. 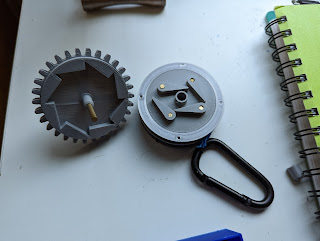 I finally got a working seconds hand. In earlier designs, there is a gear that turns once per minute, and this can either be mounted on a non-moving arbor, or attached to an arbor which then also turns the seconds hand. In most cases, as soon as I configured it the second way, the clock stopped working reliably. I believe now that the reason is friction between the seconds arbor and the minute "tube", which surrounds it. For a number of the gears, there is a long tube, either to bring out the motion to the front of the clock (for the minutes and hours hands), or to provide a bit of stability and stop the gear tilting. Like several of the gears seen here: 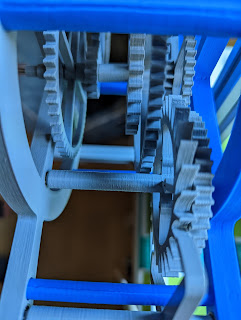 Doing it this way means there is a lot of contact area between the tube and whatever arbor or runs on. I changed this so that in such cases, the tube opens up inside, so that only the very ends have an inner diameter close to that or the arbor. This made a huge difference in the amount of friction, and the seconds hand now runs reliably.

The biggest remaining flaw is the short run time, as I discussed in a previous post. To increase it, I would need to change the diameter of the weight drum or the ratio of the gearing between the ratchet and the minutes gear. But I think I am done with this prototype and won't carry it through to a more fleshed out design. I've learned a lot from it.

One last thing which interests me is replacing the weight with a remontoire like the one used in the swingtime clock. To try this, I removed the weight drum an ratchet and just attached a small amount of weight to the gear between the seconds and minutes. You really don't need much weight for it to work:

Two binder clips are enough. If you are lucky, it will work with one.

Posted by Moosteron at 3:29 PM No comments: