After reading a Hackaday article about a sandbot, I got interested in building the Scara robot designed by Rob Dobson for it. I ended up making a number of changes to the design, controller and software. Mr. Dobson has not replied to comments on his blog or YouTube channel, so here are a few notes on the changes I made. But first, a picture. 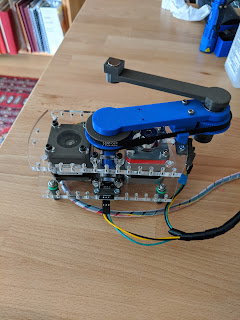 Changes to the design

The design and construction are described in the blog post A New Sandbot and the STLs and code can be downloaded from Github from the links in that article. The article and the STLs are not quite the same, though it's still easy enough to work out how to assemble it. I used the laser cutter at work to make the acrylic pieces (the first time I'd used it). The changes I made were:


The endstops in the original design used a board that can't now be purchased and required modification. I replaced it with some easy to obtain Hall effect sensors. They are not ideal as they trigger over a range if positions, though this can largely be fixed by adjusting the homing command, as described below. I designed new mounts for each of them.

Dobson uses a control board of his own design. There are two versions, one described in outline in the original blog post and a more recent one. I started by trying to use an off-the-shelf set up consisting of an Adafruit Huzzah32 and an Adafruit motor shield. The combination worked, though not very well, and I later replaced it with Dobson's Stepper Hat Trio board. (Another first: I haven't ever had custom PCBs made. At least, not since I was a hardware designer back in 1984). The Trio board is quite a good design, and there is an assembly video on YouTube. If you follow this video, note that one thing he forgets to say is that you have to put a jumper on J16 or the pullup resistors for the endstops will be floating rather than actually being pulled up, and won't work properly.

My experiments with the Adafruit parts worked OK, but were not great. The motor shield is not a modern stepper driver, and the motors run very noisily. I had to change Dobson's code to work with the Adafruit library (Github repo here). While I think his software is broadly good, doing this revealed a few things which were not ideal. Specifically:

With the Stepper Hat Trio, things went more smoothly. I encountered a few issues. I suspect the published version of the code is not up to date with the board design.

The direction pins on the board are driven by a 74HC138 3-to-8 decoder. Different outputs are used for each stepper, but the effectively share the 3 pins that are the inputs. However, the code sets up the direction on a single pin, and does this some time before sending the step pulses. I fixed this by removing the 74HC138 and replacing it with a header that directly connected one of the 3 inputs to each of the direction pins for steppers 1 and 2. I am not using any of the other outputs of the decoder, so this worked fine.

The stepper drivers I used are TMC2208s. These can be controlled with SPI, and the board is designed to do this, but the code does not seem to support it yet. Instead, I added a couple of lines of code to pull the SDI/CFG1 and SCK/CFG2 pins high, so setting them for 1/16 microstepping. These pins are shared with the SPI interface, which in turn is used with the SD card on the Stepper Hat board; not a problem as I hadn't added the parts for the SD card. One final issue I found is that stepper 2 kept suddenly halting and turning the wrong way. This turned out to be because the configuration I had adapted was pulsing pin 14 to provide a WiFi status light, and I was using the same pin for the direction control of stepper 2.

As I mentioned, the Hall effect sensors trigger over quite a wide range, and so for homing, I changed the homing commands in the configuration so that they execute the following sequence: drive the motor one way until the endstop is not triggering; drive it the other way until the endstop triggers; then slowly drive it a fixed distance further, determined by experimentation. It's not super accurate but ends up with both arms centered fairly well at the home position.

For the record, here are my changes to the code to hold the extra two pins high (possibly unnecessary), and my configuration (with apologies for the horrible formatting).