At the end of the last posting, I had just blown up the electronics. A replacement Mega and RAMPS arrived the next day, and I was soon back to where I had been before: everything working except the extruder. The extruder has two holes in the top, and the manual says to use the right hand one. But when I looked, I noticed the nozzle was below the left hand one. I took it apart. The mechanism has a gear fitted to the motors shaft and a grooved wheel to one side of it. The filament is supposed to get squeezed between the two of them. The grooved wheel was on the left.

Now I sent myself down a blind alley. I reassembled the extruder to have the grooved wheel and the nozzle on the right. It still didn't work. After a day of scratching my head, I realized that the block that holds the nozzle (and the pipe that goes down to it, collectively called the hot end) was not symmetrical. The hot end could only possibly work under the left hand hole in the extruder. So I moved it all back, and set up the motor that drives the filament to the reverse direction from how it had been by reversing the cable where it plugs into the RAMPS board. One more fix to replace a blown A4988 stepper driver, and filament started coming through. We're in business.

For the first test print, I picked a solid 1cm cube from thingiverse. Here are four prints of it: 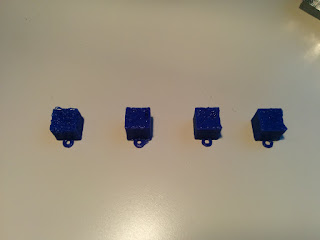 These are in chronological order. The first is at the temperature setting in Folger's config file of 219C. It's way too hot and the cube collapses halfway.The others are at 185C, 190C and 195C and are better, thought the top is still not good. Now some thin wall prints: 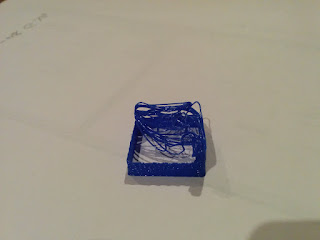 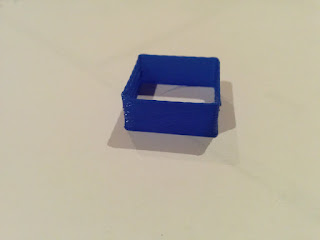 It's pretty good, though there is some layer separation.

This was using the filament sample supplied with the kit. When it ran out, I switched to a different one (JET filament, also PLA), and the cube came out fine at 185C: 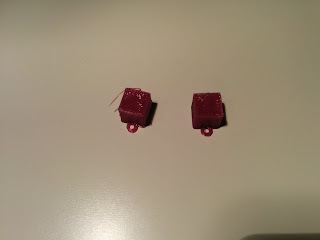 And one more object: 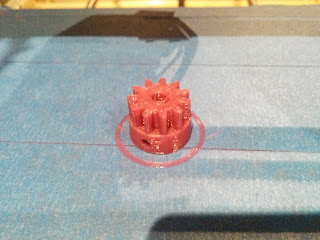 Posted by Moosteron at 9:54 PM