My office at work gets quite cold some days, and I wanted to know how cold. Also, I was at a loose end over the long July 4th break and looking for something to do. So I knocked together this project: 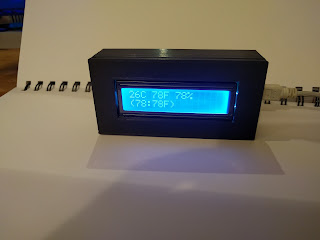 Inside the box there is an Arduino Nano, and a DHT11 temperature sensor, plus a 10k variable resistor to set the display brightness. The display is a 16x2 LCD. It displays the temperature and humidity and the range of temperatures it has seen. The readings can take a little while to stabilize, so until they do the C and F are displayed in lower case, and the % for the humidity is shown as H. The Arduino sketch is here, and the comments in this file also say how to connect it up. You might need to install the DHT library from Adafruit (info linked from this page). It uses a USB connector for power.

I designed the case with Fusion 360. It holds together with friction. I undersized the hole for the DHT11, meaning it's not quite large enough for the sensor to stick out. Rather that spend another 90 minutes printing a replacements, I just attached the DHT11 inside the case with hot glue, which works fine except that it came out a bit skew-whiff. But that's how you know it's home made.


Posted by Moosteron at 8:59 PM No comments: