A few weeks ago, I wrote about printing mechanical parts, focussing on the static aspects such as making screw holes large enough. The conclusion was not very satisfying: basically, that you have to allow clearance, but neither a fixed amount or a fixed ratio of the size seems to work consistently. One thing I did find was that there wasn't much (though some) variation with the materials and printing conditions.

Since then, I've put a little time into printing dynamic parts, particularly gears. I didn't approach this in the same systematic way, and instead just have a few examples and general comments. All of the models I used for this come from sources on the web, sometimes with a little modification.

The NASA space wrench
NASA famously designed a small wrench and emailed the file to the International Space Station, where the astronauts printed it. I don't know what kind of printer they have, though I suspect it's a bit better than my Folger 2020. The wrench prints as a single part, and then applying a little force splits off the ratchet while still leaving it captured within the overall shell of the wrench. Here's mine, printed in PLA using my standard settings (30% infill and, I think, 0.2mm layers): 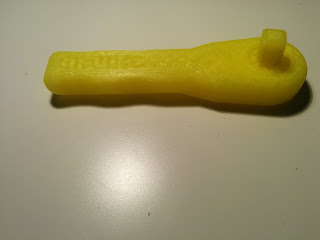 It doesn't move smoothly, but it does work, without any modification to the model or tweaking of the printer settings.

Planetary gears 1 (with base, without base)

I tried this set of planetary gears twice, once on PLA/PHA (red) and once in PETG (white). It will just about turn but tends to jam. I think this is for a couple of reasons. First, the printing leaves a raised seam. It might be possible to improve this by using the Slic3r setting to randomize the seam position. Secondly, the triangular piece which holds the large gears has holes with only eight sides, and the same goes for the shafts on the gears. More sides might make them smoother. However, I think the overall reason is just that the tolerances are too tight. The white one runs better than the red one, and this is probably because it doesn't have a rigid base, allowing the outer ring to deform slightly and adjust to the gears as they rotate. 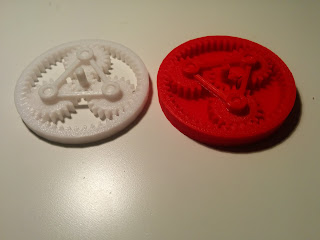 Thingiverse contributor emmett has created some nice designs, one of which is a planetary gear bearing in which the gears have angled teeth. It prints as a single piece. You can customize it in many ways: diameter, thickness, number of gears, number of teeth and so on. One parameter is the tolerance, or clearance between the elements. I printed one of these at the recommended tolerance of 0.15 and it came out as completely solid and unusable. With tolerances of 0.6 and 0.7, it works. It's quite loose at these tolerances, so 0.5 or even 0.4 might work better. These are 10mm tall, instead of the recommended 15mm, to reduce the printing time a little. After a bit of working in, they move quite smoothly, though the large tolerance and reduced height means the gears tend to slip out of alignment and jam. 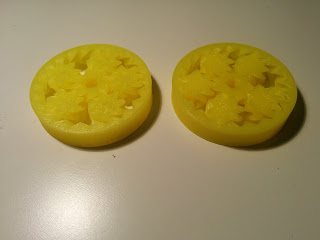 Cube gears
Emmett is also the originator of the cube gear. There's various customizations possible. I made one with a 5:6 ratio, and one with 1:2 ratio. I shrank the second one to half size in Slic3r. Here they are: 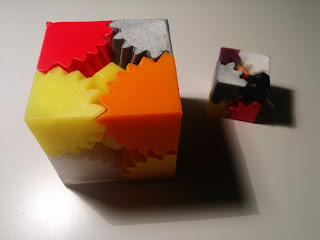 I was using these for experimenting with different filaments, hence the range of colours. The large one worked well. It can be a little stiff, but once it starts turning, it goes smoothly. Some people recommend lubricating it with graphite or oil, and this would probably help. The smaller one does turn but is loose. The problem here is that it is held together with small plastic pins, and at this size, the reaction force from turning the gears pushes some of the pins out of their sockets. The more salient point is that both worked without changes to the clearance.

I don't have an overall conclusion, except to say something similar about the static parts experiment. You need clearance, but may need to experiment to find the right value.

Finally, here's a video. (Sorry for the poor quality. I don't have a good way of holding my phone steady. Now if only I could print something to do that....)