I have made several attempts at making clocks using a 3D printer, always ending in a clock that didn't run at all or that would only run for a short time. Some of this is attributable to the quality of the prints. My first two printers really weren't up to the level of precision that is needed. Another source of problems is my inexperience with debugging clocks, and mechanisms in general. I know how to think about solving software problems, but I don't have a good feel for where to start with mechanical ones. I've gotten better at this over time, and in the case of clocks I have a better understanding of them as physical systems than I did at first; I mean things like how power is transmitted through the system and how it interacts with the elements that control the timing. And finally, some of the designs that I tried just weren't as good as they might be. I don't mean that the designer was negligent, just that you find many objects on 3D printing sites which worked when the designer made then and so they generously shared the design with the community, but they didn't test them to allow for variation in printers, materials and the abilities of the person making the clock.

I recently came across a design by Steve Peterson for a clock intended to be easy to make and get going. He accompanies the design with detailed videos on assembling and debugging the clock. It has variants for different run times, from 7 days up to 32 days, with 10 days being the recommended starting point. (Strictly speaking, the run time depends on how long it takes the weights that drive the clock to reach the ground; if hung in a deep stairwell, it would run for longer.) I successfully built this clock and have it running, and enjoyed the process.

Here are some pictures and a video of my build of it: 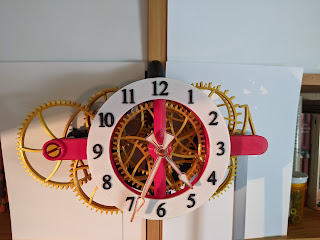 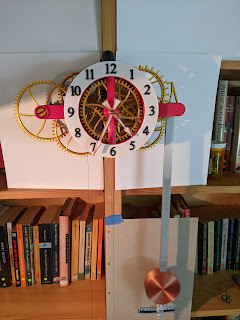 One element which is not complete is the weight shell. I am waiting for Amazon to deliver the BBs to fill it and will then fit it. 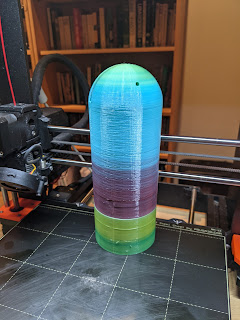 In the mean time, metal water bottles provide the weight: 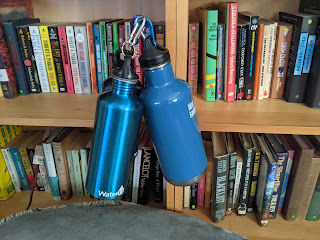 The dog bed provides a convenient soft landing in case something should break.
The frame and weight shell are printed at 0.3mm instead of the recommended 0.15mm to make the print time more manageable. Most of the parts are printed in regular or silk PLA. The weight shell is rainbow PETG; it's a bit rough due to the 0.3mm layers and because I upped the print speed for it. I made one modification to the original design. There is a gear that has to be slid to the right position on its arbor, and also has to be so tight on the arbor that it it won't rotate. I replaced this with a version that could be held in place with two M2x6 machine screws like this: 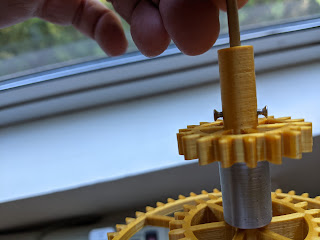 The screws would be better as M2x4, but they were just too short. This change makes it easier to position, while giving some confidence that it won't slip.
The debugging procedure recommended by Steve starts with checking the pendulum will swing freely for about 10-12 minutes. He recommends cleaning the factory grease out the bearings to reduce friction. At first, I got it to run for just under 10 minutes, this was because I had put the wrong bearing on, so that only one of them was clean. The clock as a whole ran initially for 20 minutes and then 40 minutes. At this point, I disassembled it, fixed the bearing and visually inspected everything. One of the gears has some distorted teeth due to first layer adhesion and two others had minor amounts of elephant's footing. I reprinted all of these. With 2 pounds 15 ounces of weight, it ran for 7 hours and then on a second run for almost 28 hours. I increased the weight to 4 pounds 7 ounces, and and time of writing it is just coming up to 60 hours, with one rewind.
I think when it stopped after 7 hours, it was probably because I didn't have the beat right. Steve discusses this at length in the debugging video. I found an app called Cuckoo Clock Calibration which really helped in checking it, as well as setting the beats per hour by adjusting the pendulum length. The app uses the phone's microphone to listen to the ticking and reports the time between ticks, whether the clock is level and the overall rate. One other thing I noticed is that the tick sometimes has a slight double-click sound to it. Perhaps the pallet is bouncing off the escape wheel tooth for a moment. The app confirms this: you can see an occasional double spike in its display of the sound waves (I've tried to take a screenshot, but the noise of pressing the button to do it swamps the sound of the clock).
I also noticed that the ratchet was not completely in position after rewinding, like this: 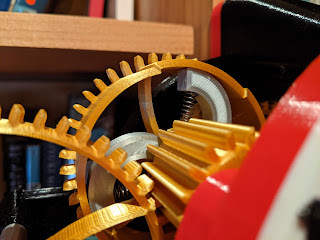 I'm planning to lightly sand the inside of the ratchet drum and make the springs a little weaker. This could be the source of the stoppage after 28 hours, as if the ratchet then slips, it might interrupt the operation of the clock.
A couple of other build notes. I used brass for the 3mm arbors, as it's easy to cut. For the 1.5mm ones, I already had some 1.4mm steel axles of about the right length, and then seem to have worked fine. Several ballpoint pens gave up their lives in order to supply me with springs. There's a little finish work I still intent to do, for example the minute hand has a small blob of filament on the edging.

Huge credit goes to Steve Peterson. It's a good design with good supporting information. There are many thoughtful decisions, such as using gear teeth with a profile that makes them easier to print. I'm really happy with it, and plan to move on to some more challenging clock models next.

Posted by Moosteron at 9:03 AM

I initially designed the clock using and recommending silk PLA for the gears. It looks great, but seems to have a lot of friction. One key indication is the ratchet sticking in the intermediate position as seen in your photos. The stickiness seems to get slightly worse over time and some of my clocks stopped completely after running great for a few months. One click on the rewind key breaks it loose and the clock runs again for a while.

The first clock I designed was printed in normal non-silk PLA and it is still running strong after two full years. I think I am going back to normal PLA for all my pendulum clocks in the future. Silk PLA can still be used in the motorized desk clock where there is plenty power reserve, but it is just too sticky for weight driven clocks with long runtimes.

Thanks for the info. That's certainly interesting about silk PLA. I first worked on clocks and other mechanisms a couple of years back and one of the things that put me off was the appearance of most regular PLAs. I just don't want to see them on my wall. But perhaps it time to take another look at what's available and see if I can find some that looks good.

The silk PLA scored 10, 11, and 12. They had more friction than all other types. Translucent scored 7 and 9, just slightly better than silk PLA. Normal PLA had less friction than all the others, except one that scored an 8.