Now, the last few steps of the construction.

Step 23: end stops, 1 hour. The parts inventory goes wrong here. This step calls for 3 M3x18 bolts and 6 M3 nylock nuts. But there are only two of the first and 5 of the second left. I counted the parts off against the listing on the packaging and Folger sent as many as they said, it's just that their parts listing doesn't have enough. I improvised by taking back one of the three M3x30s that hold the Arduino board on, and the nut that goes with it.

The next issue is that the levers for the limit switches are not bent back as far as the one in the construction guide. As the mounts for the limit switches stick out over the end of the switch PCBs, this means that the can't make enough contact for the switches to activate. I fixed this for Y and Z by angling the PCB compared to the mount. For X, I bent the lever out a bit. I'm not sure it'll stay like this.

Step 25: RAMPS wiring, 5 mins. Easy, though the 16 gauge wire was missing from my kit and I used some that I already had.

Step 26: extruder fan wiring, 10 mins. Easy. I used heat shrink tubing for the places where the wires were soldered together.

Step 30: tidy the wiring, 1 hour. I spent a long time on this, as the prospect of having hundreds of little wires near to things that get hot is not appealing. I used spiral wrap, not the stuff that Folger provide, which is quite rigid, but a more flexible one. I followed the principle of bundling together all wires that came from the same place, thus one bundle for the Z motors; one for the extruder motor, heater, thermistor and fan; one for the X motor and X and Z limit switches; one for the Y motor and Y limit switch; and one for the bed heater and thermistor.

Extra step: motor voltages, 10 mins. In the manual for Folgers acrylic Prusa model, they have a step for adjusting the reference voltages to the motors. On the forums, Dan from Folger said use the same settings, so I have X, Z and extruder set to 0.350V and Y to 0.550V. Also I set up a piece of 8x8 glass ($10 from a local glass merchant) on the bed, put blue painter's tape on it, and held it down with two bulldog clips. 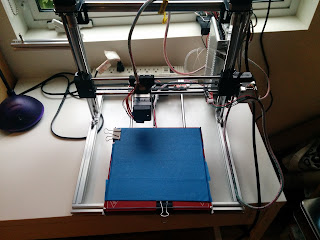 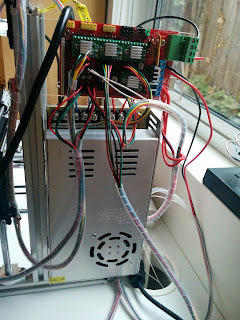 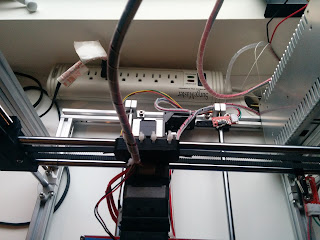 Next: software and calibration.