As mentioned at the end of the previous part, I ordered a replacement RAMPS board from Amazon (this one). It's well made with clean and accurate soldering. One particularly nice touch is that the pins for the end stop connectors are color coded corresponding to the cable colors. This is important, as the Folger instructions note that plugging these connectors in the wrong way round can destroy the Arduino.

The original, horrible RAMPS board: 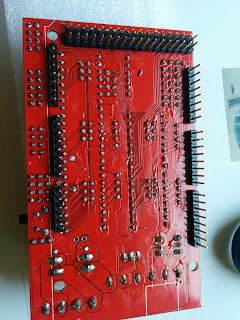 To be fair, Dan at Folger offered to send me a replacement RAMPS board, but by then I already had the one from Amazon. If I blow it up, maybe I'll take up his offer.

I also made two changes to the build so far. I changed the Y motor so that its connector is horizontal rather than vertical, to avoid the cable colliding with the heated bed in one of the steps listed below. And after at first thinking that the acrylic mount was misdrilled, I realized that I had it on wrong. You need to compare the holes on it to the ramps board and get the direction right from that.

Now back to step 19: mounting the electronics; about 35 mins. I made one change here, by attaching a spare heatsink to Q3 on the RAMPS board. This is the driver for the heated bed, and I've heard that it helps avoid it overheating. Switching to a better MOSFET is another option.

Step 20: attach motor wires; 10 mins. You can plug the wires into the motors the wrong way round. For the connections to the board, the X motor really is plugged in back to front compared to the others. The forums have a long discussion on this. Rather than follow what it says in the manual and attach the wires to all the motors first, I did them one by one: attach the wires to a motor, then the board, then the next motors, and so on. There's less chance of picking the wrong motor. I also spent an extra 10 minutes putting wrap round the wires to tidy them up. I'll redo this at the end, but for now it avoids an OMG spaghetti situation. 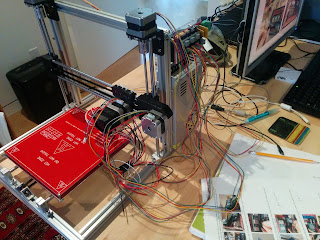 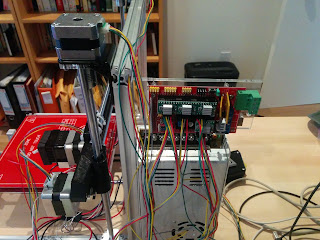 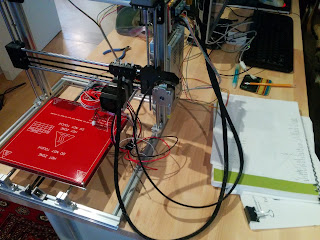 Step 21: wire the heated bed; 10 mins. One tip for this stage is that if the heated bed wires won't stay in the connector, just double the exposed end over, or blob a little solder on it. You can gently tug on the wires to make sure they are connected well, and also put a meter across the screw terminals. For both the heated bed and the extruder, you should see a resistance of a few (2-4) ohms.

Step 22: thermistor wires; 10 mins. Fairly simple. I soldered the termistor wires to the pins for the connectors  rather than crimping them.