Small nuts and bolts seems like an interesting challenge for a 3D printer. You need accuracy in all 3 directions to make sure they are circular and that the threads line up from one layer to another and have the right pitch. I wanted some plastic M3 nuts and bolts to mount the Arduino board without any risk of shorting something. My first attempt, when I was still getting to grips with the printer, was a dismal failure: 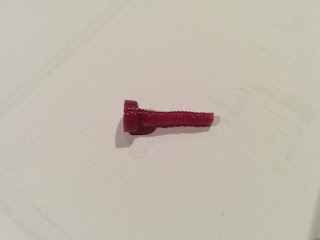 It looks like a tiny elephant blowing its trunk. Since then, I've got better at picking temperatures and layer thicknesses and have also made a few physical adjustments.

For printing the bolts, there is a choice between doing them horizontally, in which case they would need some support, and vertically, which I think is better. I was printing 16mm long bolts, meaning the print is tall compared to its base area. Each layer is small, and so this means it does not have much time to cool before the next layer starts. That might be the cause of the wobbles in the earlier example. I tried both 0.1mm layers and 0.05mm with 60% infill in each case. In a previous post, I said I had not succeeded in printing at 0.05mm; this time I did. Here are the results. As you can see they are pretty well straight. 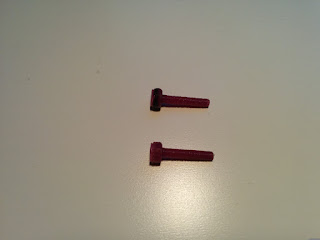 Nuts don't have the same height problem, but as they have very little surface area (they are more hole than doughnut), it is hard to get them to stick. I succeeded in printing a 0.05mm layer version of this. The first attempt at a 0.1mm one detached from the bed and got dragged around by the nozzle. However, adding a 3mm brim in Slic3r solved it. A real metal 3mm bolt went through both nuts, and they also worked with the printed bolts. The metal bolt probably helped clear out the thread. I am not sure I would trust them with a lot of load, but they feel quite firm, and the nut sits squarely on the thread. I also tried a different model. This worked OK, but was a little tighter.

Another question is what to do when you want to print several items. Do you print them one by one, or lay them all out and print them at once? In the latter case, there is more time for each layer to cool before you start the next one, but it also puts more demands on repeatable positioning. I tried this with two bolts and two nuts as a single print. At 0.05mm, I have had no success: I end up with disfigured blobs of plastic which eventually stick to the nozzle. 0.1mm did not do any better. They may be ways round this, such as reducing the print speed or keeping the objects really close together, and for now I am finished with this experiment. Buying nylon nuts and bolts is a better solution for real work, but it's nice to know that if I needed some in a hurry I could make them.
Posted by Moosteron at 8:07 PM