In my last post, I said that I had started using an E3D lite6 hot end. Here I'll describe some modifications I've made and my reflections on this hot end so far. I haven't done much printing with it yet, and only with PLA, so there's more on the modifications than the experiences.

Also, a cure for unwanted hair.

The 30mm fan than comes with the E3D is noisy. It has a deep resonant vibration which was driving me nuts. I decided to reuse the 40mm one from the Folger extruder. With my old hot end, I had a fan duct which provided some cooling of the print. It's never been clear to me how much difference it makes, but I decided to add one in case it helps; the general opinion seems to be that some cooling helps when printing PLA. The 2-in-1 duct here looks nice on paper, and was not so good in practise. First, it gets in the way of seeing the nozzle. I like to be able to see what's happening, especially to check the first layer. Secondly, it doesn't fit very tightly. And thirdly, the walls are very thin so the whole thing is flimsy. You can break it in half with not much effort.

I'll come back to fixing the visibility issue in a moment. To make the fan duct fit more robustly I made a bracket that fits onto the same screws that hold the hot end mount I made earlier and onto one corner of the fan duct. This provides a bit of extra support, particularly against the fan duct rotating around the heat sink. While I was at it, I printed a holder for some LEDs replacing the one I had before. To make it easy to switch between fans and to decide whether to use the LEDs or not, I cut into the fan wiring and put in a socket, with plugs on the fan and LEDs. The LED mount is filled with hot glue to hold the components steady. As well as the three LEDs, there's a resistor, and a diode to protect against connecting it the wrong way round. Interesting observation of the day: hot glue is hot enough to soften PLA.

I did a few successful prints with this set up, and then some thing odd happened. The hot end wouldn't get above 180C when it was less than 10mm above the bed. PID autotune timed out. Based on this thread, I suspected the air flow from the fan duct was cooling the nozzle too much. After spending several hours scratching my head about this and trying alternative designs, I had a sudden revelation. The E3D instructions say set MAX_PWM in the firmware to 150. Well, don't do this. You just don't get enough power to the heater. Set it to 256 (the maximum), and not only does it fix the problem of not reaching full temperature, it means you can get from cold to 190C in about two minutes.

Once I had fixed this, I made a couple of modifications to the fan duct. First, I started with a variant which has thicker walls. Then I moved the vent back and up slightly so it is clear of the nozzle. Finally, I added a slot in one side, so that I can insert something to block the flow to the bed, inspired by another variant on Thingiverse, which I am now not able to find. It's too thin to take a printed piece, so I'll need to look for a piece of metal or thin and hard plastic. I haven't tried this out yet. 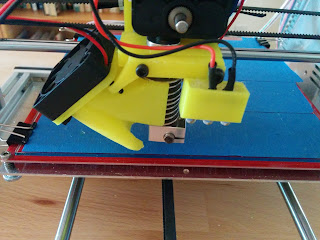 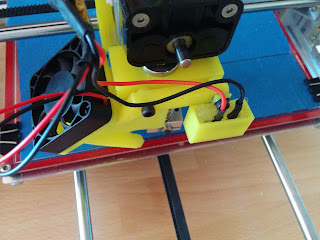 Now back to the E3D itself, and my opinions so far.

I didn't have clear reasons for buying an E3D. It wasn't that I looked at my original set up and went: X is no good, I want to fix that. There were two main things that bugged me about the Folger hot end: it always oozed a bit when waiting (for example at the start of a print), and I got a lot of very fine hairs or spider's webs on prints that involved travel moves. You can look back a few episodes at the torture tests episode for examples. I bought it mostly because it seemed like a good thing which might in some vague way make things better.

What I have seen so far:


So all in all, it's not a clear cut improvement. It may prove to be better over time.

There is one footnote to this on the spider's webs. I had tried a few times to get rid of them by tweaking various parameters with no success. I think I have now found a formula which works. You need to increase both the retraction length (Slic3r settings > Printer > Extruder) and also increase the retraction acceleration (Marlin or in the EEPROM). I now use 3mm for the first and 2000 mm/s^2 for the second. I also needed to set 2000 as the maximum extruder acceleration. To test this, I created a small object shaped like a hockey stick, lying flat on the bed. Without these changes, there are hairs between the end where the travel moves are. With both changes they are gone. With either change individually, they are back. I'll see how this works on more challenging pieces in future. Here's a picture to show the difference: 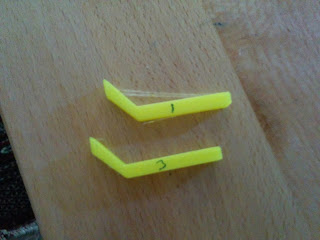 Posted by Moosteron at 7:28 PM