It's about a year since I started making 3D printed clocks, with Steve Peterson's SP5 clock, and I decided it was time to try designing a clock of my own. I have modified some of the clocks I've made in small ways (adjusting fit) and in larger ones (replacing the motion work in the Swingtime clock). The only complete design I have done was the William Strutt epicyclic design, and even them much of it came from a published diagram. Now it's time to do something from the ground up. I don't know if I will carry this all the way through to a reliable design; it may turn out I don't have the skills or the patience to do so.

The starting point is a basic Graham escapement design with a rather conventional wheel train and motion train. I have a few ideas for ways I would like to refine it over time. The gear tooth counts are taken from this design on Thingiverse, itself remixed from a design by Thingiverse user TheGoofy. Having said that I wanted to design the clock myself, it might seem inconsistent to take the gearing from an existing design, but there are only so many possibilities which give you the right ratios and a number of teeth that you can manufacture. I like this wheel train as it allows you to add a seconds hand easily. Assuming a pendulum with a 2 second period (so about 1 metre long), you get this:

You have some choice about the gearing from the minute wheel to the weight drum. My initial design has an extra 20 tooth wheel on the minute arbor engaging with a 60 tooth wheel on the weight drum for a 3:1 reduction. If the weight drum has a diameter of 50mm, then it means that for each 3 hour rotation, the weight drops pi times 50mm, so that in 19 hours the weight drops by 1 metre. The pendulum length is something I will reconsider later.
I did the design in Fusion 360, using the standard add-in for generating the gears. The add-in only generates involute gears. I feel sure that I read something which said that cycloidal gears are better in the train from the weight to the escapement where each step increases speed and reduces torque, and involutes are better in the train from the minute wheel to the hour wheel, with the opposite characteristics. However, I could not find the reference again and there are many places which say to use involutes unless the teeth are so small they become fragile. This reference concisely summarizes the debate. If I wanted cycloidal gears there are tools like this one which output a DXF or SVG. I used a 14.5 degree pitch angle and a small amount of backlash to make the spacing between the teeth better. All of the pairs of gears are design to have their centers the same distance apart (60mm) so that I can stack several on the same arbor if I choose, leading to various different modules from 1.33 to 1.5. For the escape wheel and anchor, I used a parametric design a created a few months ago in Fusion 360, based on Jacque Favre's tutorial.
(Side note: what I actually did for the gear was use the add-in, and then project the profile into a new sketch. I could then project the pinion profile into a new sketch. This makes combining them a little easier.)

Here is a picture of a prototype, with a couple of minor parts missing: 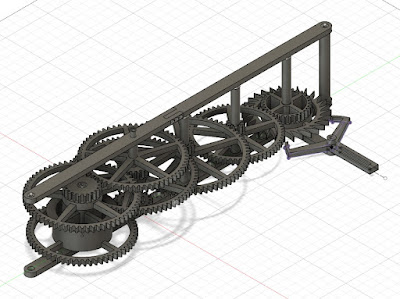 The purpose of the prototype is to check everything seems to fit together. The weight arrangement is unfinished. It has no ratchet to allow for rewinding. The frame is very flimsy as I designed to print quickly. There are no bearings or attempt to reduce friction in this version, and the anchor is designed so I can experiment with different positions for the pendulum.
I printed part of this: the frame and the wheel train from the escapement through to the minute wheel, modified to include a weight drum. Originally I wanted to try this with various weights to get an idea of what weight I might need in the final version, but I had cut corners in the frame. So in the end it only ran for a few seconds with a weight hooked up. However, by applying force to the minute wheel by hand I was able to see it roughly working:
The beat isn't right and it takes quite a lot of force to make it run, but it gives an idea that things are generally correct.
More, hopefully, to follow.
Posted by Moosteron at 5:32 PM