There are many people out there on the web who have taken old ATX computer power supplies and adapted them for use a bench power supplies. Instructables has a page with many such designs, differing mostly in the style of case, and the connectors they use. You can also buy a hugely overpriced kit from Sparkfun. I had an old power supply from a disassembled PC and decided to do the same. I decided that I would use 4mm binding posts so I can plug banana plugs into them, and to include an on-off switch and a couple of LEDs, one for when the power is connected the ATX (standby) and one for when it is actually on. For the project box, I chose a CES box, size 3.97" x 2.12" x 1.72". That's 100mm x 54mm x 44mm in measurements used by grownups.

To get the layout of where I needed to drill holes and cut a hole for the on-off switch, I drew up a diagram in Open Office Draw, then printed it out with lines marking the centers of the holes. One of the holes, for the switch, was rectangular, so I marked the boundaries of where I'd need to cut. It looked like this: 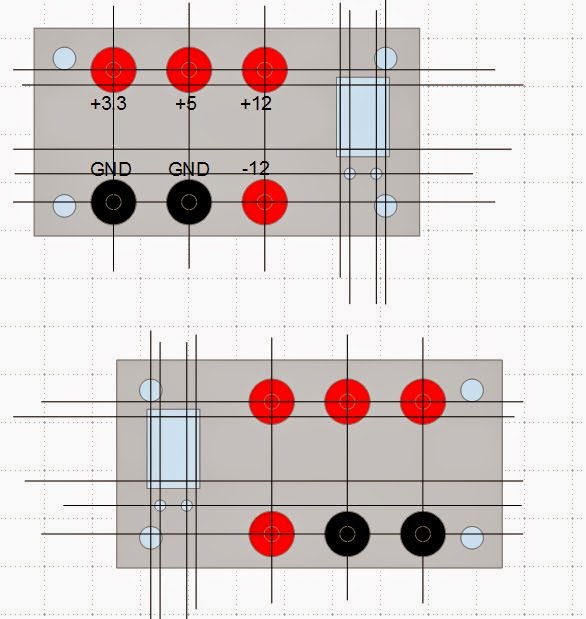 I then took the lid of the CES box and placed it face down on the printed reversed diagram, taped it in place, and used a rules and something pointy to lightly score the positions I needed to drill and cut. Note that my power supply does not have a -5V output, as some older ATX supplies do, and having two posts for ground was just for convenience.

My ATX supply had many wires and connectors coming out of it: 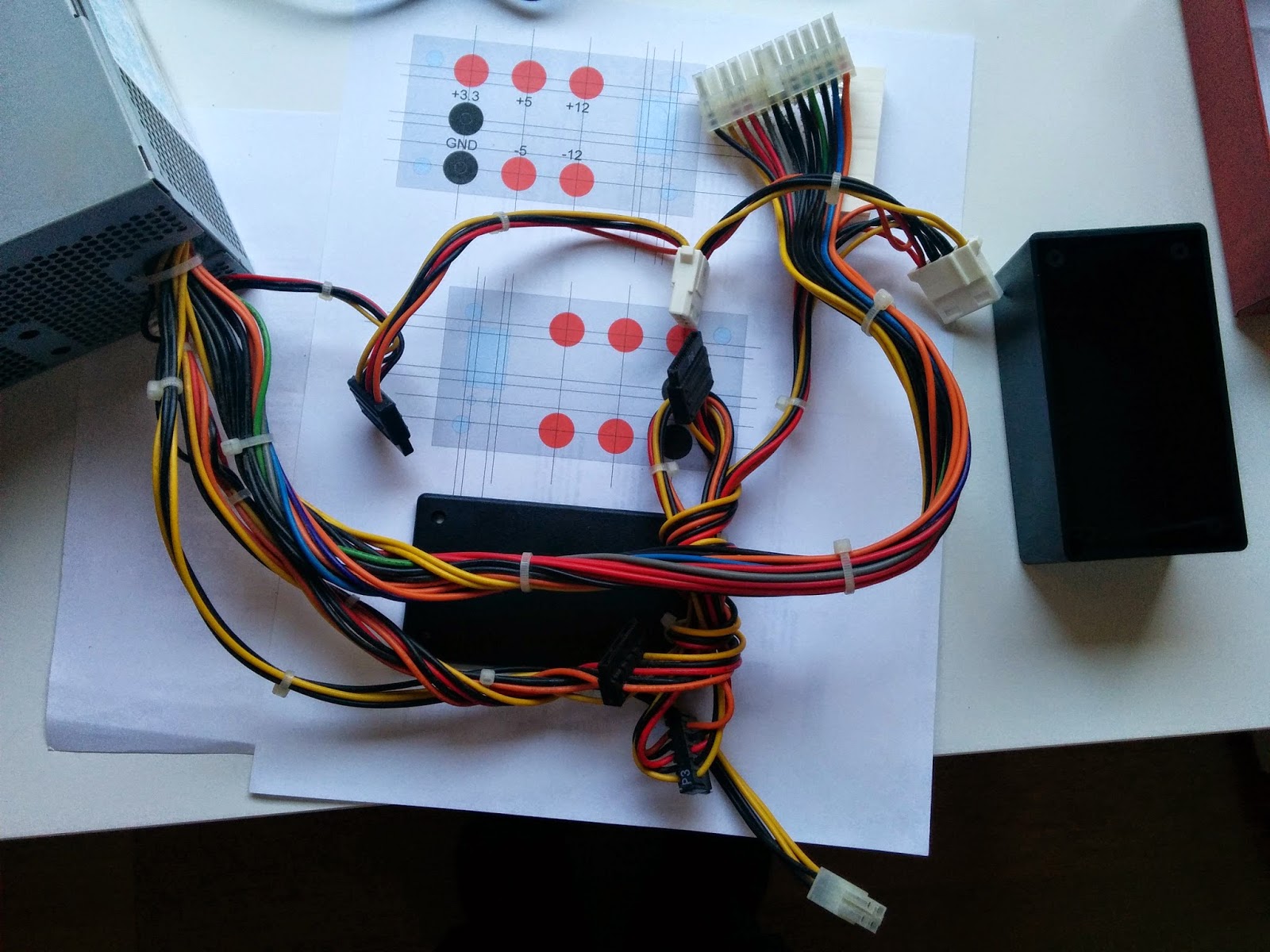 The printed page in the background is an older version, before I realized that there was no -5V. The important connector is the rectangular 24 pin connector at the top right. I hesitated between putting a 24 pin female connector in the box as in this design, or snipping the 24 pin male connector off and bringing the wires in directly. Using a connector has the advantage that if the power supply dies or if I wanted it for something else, I could disconnect it easily, but I wasn't sure that I could cut a clean hole the right size and make it mechanically stable. The design I just mentioned attaches the connector to the box with epoxy, but as these connectors are quite stiff to attach and remove, I'm not sure how well that would survive. Another option might have been to attach the female connector to a piece of stripboard and then attach that the the case with a couple of screws. That plan was thwarted by the size and pitch of the pins on a Molex Mini Jr connector. It's 0.165", so it won't go on standard 0.1" stripboard. One more option is to keep the connector, but make the connection inside the case, with just a hole in the side of the case to bring the wires in. This is promising, but with the size of case I had chosen it was hard to make it work. So in the end I decided to connect a 24 pin female connector outside the box and just bring through the wires I needed. I brought in one wire for each voltage and signal, and two for ground.

With this, we're ready to get out the drill and the dremel. I'm not good at doing the physical construction part of projects, due to a lack of both skill, and good tools. Or perhaps experience rather than skill. I can usually get something that's OK, though it might not look pretty, and in this case I ended up with the LEDs a bit skewiff. I see an analogy with what my coding was like back when I started: I could hack my way to something that would work, but in an unclear way and lacking finesse. 35-plus years of programming and working in a professional environment changed that, and maybe if I spend more time on projects like this one, I'll improve.

With all the parts in place on the front panel, it's a matter of connecting everything up: 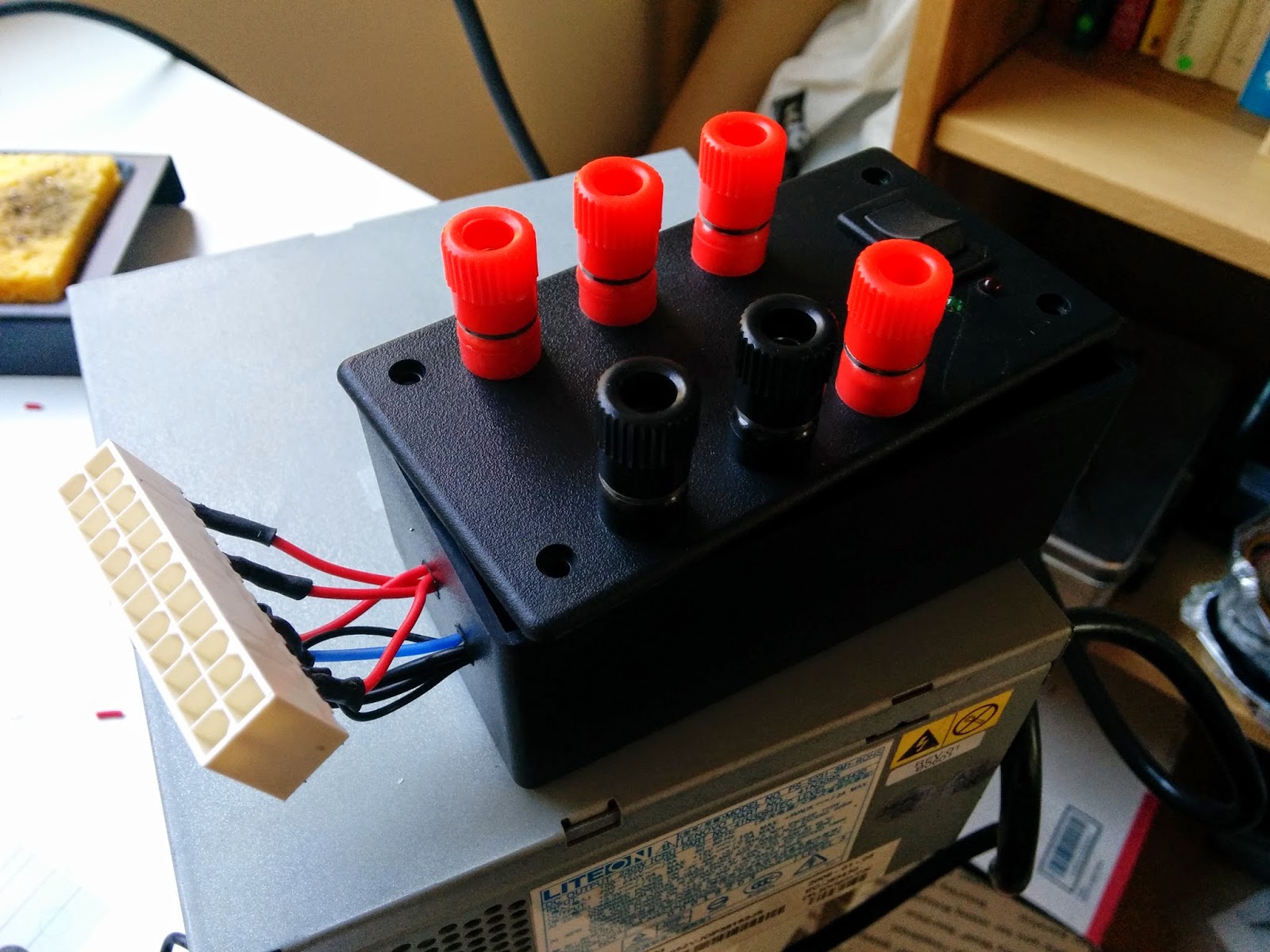 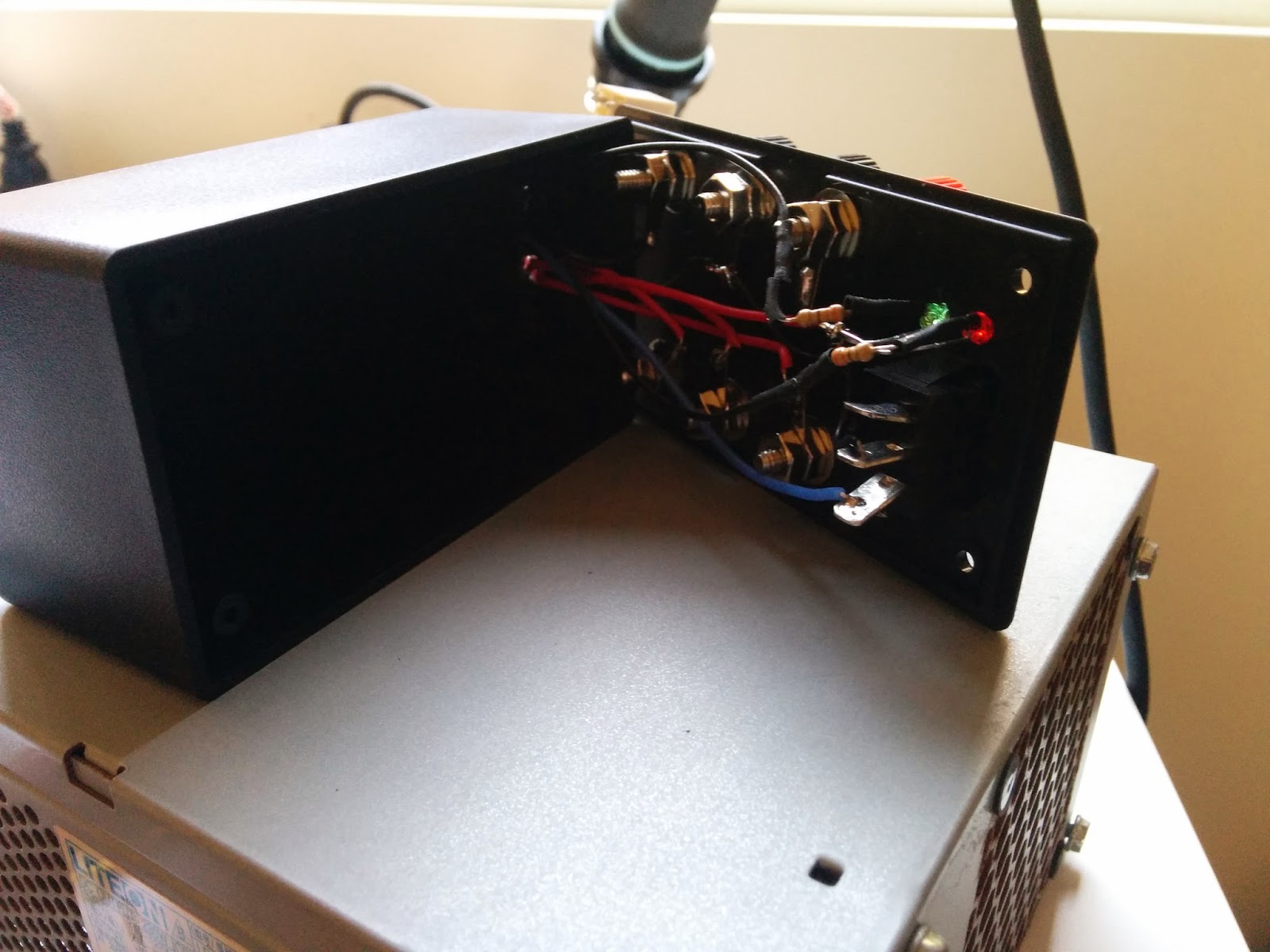 I attached the ATX connector to the outside of the case with hot glue, and also daubed a bit around inside to anchor the LEDs and the bundle of wires. To prove it works: 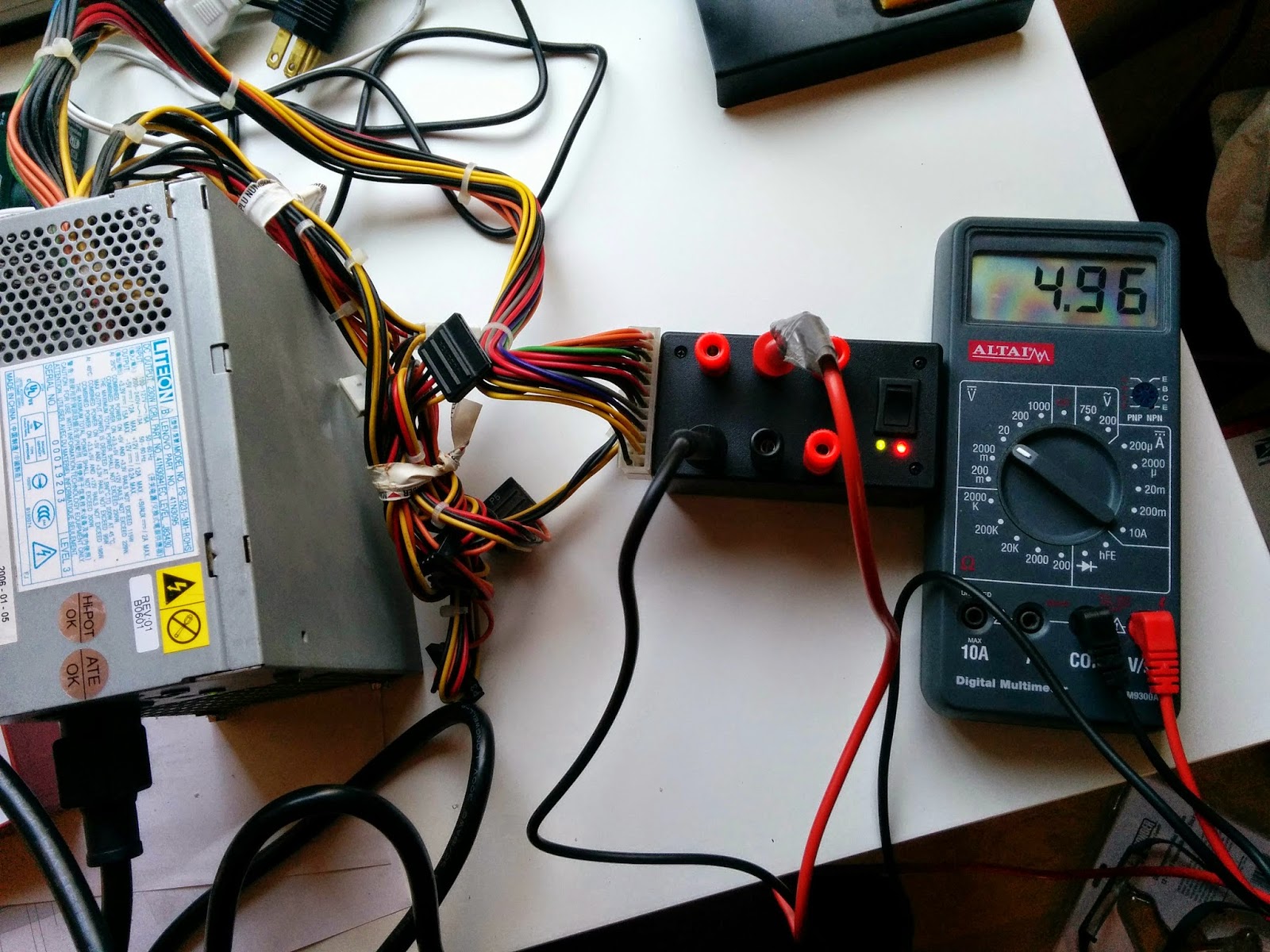 I still have to make some labels for the binding posts, and then it'll be done.

Things that worked and didn't about this. Worked: it's compact, gives useful voltages. Drilling and cutting the case was imperfect but not too bad. Less good: the weight of the bundle of wires from the ATX makes it hard to keep this stable. Some of the instructables projects are physically attached to the ATX case, and this is probably a better idea. Other less good things: I'm not sure how well the glue holding the connector will last. And finally, I scratched the case in a couple of places while putting the whole thing together, which is just annoying. Overall, I'd rate this as 2/5: it works, but is a little disappointing.

Posted by Moosteron at 6:01 PM