In previous posts, I have described some experiments with a serial DAC - one that uses a SPI interface to load the values. I noted that the speed of the serial communication put a limit on how fast you can drive it. How fast could we go with a parallel DAC? There are plenty of parallel DAC ICs available, but there is also a simple alternative that can be used for doing speed tests, and that is a resistor ladder. Wikipedia has a page about them and there is another tutorial here. In the resistor ladder, you need two values, one twice the other (call these R and 2R). I used R=10k. I didn't have enough resistors lying around to use 10K throughout, so for the 2R resistors, I used a 12k and a 8.2k in series. This gave me enough for a 9 bit DAC.

For a first, experiment, I connected it up to an Arduino Uno, with the top 6 bits on pins 8-13 (port B) and the bottom three on pins 5-7 (port D). It's fastest to drive the ports directly, rather than using digitalWrite. The code is below. It has multiple options in it: sampled triangle and sine waves, and a square wave, using a delay to get the frequency approximately right; and a version which drives the ports as fast as possible.

The results are remarkably good. Here are example triangle and sine waves at about 10kHz: 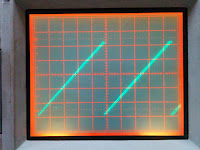 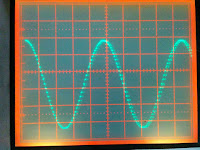 For square waves, they still look OK at 100kHz: 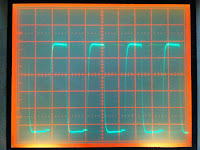 The fastest square (-ish) wave I could get was about 250kHz: 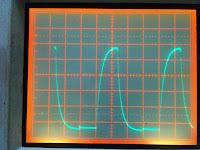 In the speed test version, I could get it up to around 2.63MHz, though of course the signal is nothing like a square wave at the point: 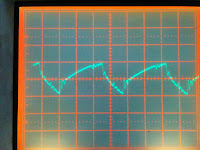 By ignoring the lower order bits on port D, I pushed it up to 4.17MHz, with the waveform looking not much different to above.

Note that this isn't a practical design for a real DAC. It works in these experiments because the scope doesn't put much load on it. In a real design, you would put some buffering such as an opamp on the output, and also use resistors with tighter tolerances and more exact values