One of the designs in the book Making Wooden Gear Clocks is for an electromagnetic gear clock driven by a simple and baffling mechanism. I took the design and adapted it for 3D printing; as with some of the other clocks, I won't publish my design as the copyright status is unclear. Here is the clock: 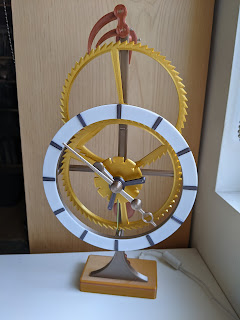 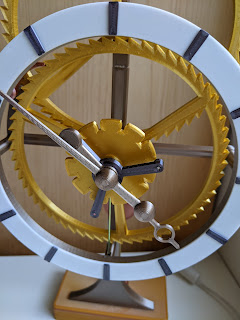 The clock works as follows. The pendulum is driven electromagnetically by means of a magnet in the end of the pendulum and a coil in the base. The coil detects when the magnet comes close and then sends a pulse to drive it on its way. The pendulum drives a cam with two pawls on it. This in turn engages with a toothed wheel and advances it once per second. The principles thus far are similar to the Thriecan clock described in a previous post. 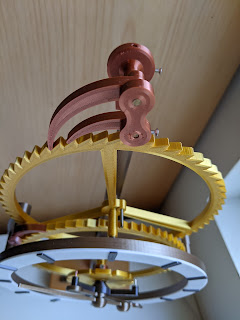 Now we get to how the motion of the minute wheel is divided down 12:1 to the hours motion. This is done by means of the daisy wheel. The daisy (or daisy wheel) motion was invented around 1830 by Aaron Dodd Crane. The wooden clocks book does not credit the invention or explain how it works. There is a little more information in Philip Woodward's book My Own Right Time.

The daisy wheel has 11 petals and 11 notches between the petals. A device ("tri") with 3 arms interacts with the daisy wheel by means of pins mounted on the ends of the arms. A rod attached to the daisy holds it loosely in place in the frame, allowing this movement while preventing it from just rotating with the tri. Woodward mentions that the number of arms and pins is not critical. The hour hand is mounted on the tri. The key to this is that some parts of the mechanism are mounted eccentrically to the minute arbor and so the whole system operates in a manner similar to epicyclic gears. I will have more to say about that eccentric mounting in a moment, but first I want to say that I simply do not understand this in any detail. Every time I try to reason it through, my brain breaks. The explanation in Woodward and in another work as well as several YouTube videos do not make it any clearer to be and mostly they end up with a statement along the lines of "you have to see it to believe it". It clearly does work. I just can't understand how, and why having 11 notches on the daisy leads to a 12:1 reduction.

I've been a little evasive about exactly what is eccentric, and the reason for this is that I think the design in Making Wooden Gear Clocks is incorrect. In the design as shown in exploded form in the book, on the accompanying plans, and in the photos showing it being assembled, the daisy is mounted co-axially on the minute arbor. A part called the tri excentric in the book is also mounted on the arbor, such that its axis of rotation is offset from the axis of the minute arbor. The tri rotates about this offset axis. Thus the parts look like this: 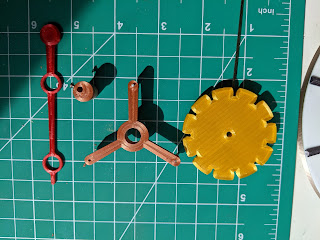 The daisy therefore stays stationary while the tri and hence the hour hand rotate around an axis which is not coincident with the minute axis. As a consequence the hour hand moves off-center to the minute hand. You can see this in the following video, in which I turn the minute wheel by hand.
I have not been able to find any video of other builds of this clock which show it running for more than a few seconds, which is not long enough to see the problem. Consulting Woodward, Shelley's book on Crane, and several YouTube videos (example 1, example 2, example 3) show that this design is simply wrong. The tri and hour hand should rotate on the same axis as the minute arbor. To quote from Woodward:

the daisy wheel is mounted loosely on an eccentric collar rigidly fixed on the central arbor of the clock.

It is the daisy that should be eccentric to this axis, and although the daisy does not rotate, it does move a little to accommodate this motion. It's hard to believe that the author of the design and the editors of the book failed to notice this. As far as I can tell, they have not acknowledged the error or published any errata for the book.
After initially building the clock according to the published design, I reworked the daisy and tri to the correct configuration. Here is how the hour hand motion looks now:
The reworked parts look like this: 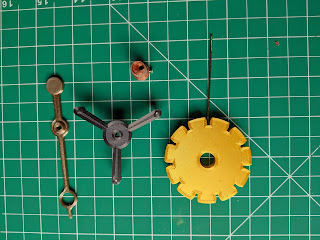 As with some of the earlier clocks, I view this as a clock demonstrator rather than a practical timepiece. I wanted to see how the mechanism worked. For this reason, I didn't spend a lot of time on the frame and base. I quite like the minimalistic "candlestick" design. I thought it might be too unstable, but it seems OK.
I used my own electronics in this clock, detailed in an earlier post. One unexpected issue I had was this: the clock was working fine when I had it attached to a piece of plywood for testing. Then when I mounted it on its base, the pendulum became very unstable. It would jump all over the place. This turned out to be because the magnet was attracted to the screws in the corner of the case and to the USB connector. I solved this by using weaker magnets and moving them a little lower to compensate.
Posted by Moosteron at 9:03 AM