The Thriecan Clock is a modified version of Clayton Boyer's Toucan clock, adapted for 3D printing. The key feature of this clock is a electromagnetic pendulum. There is a magnet attached to the end of the pendulum and a coil hidden in the base. As well as providing the timing, the pendulum also provides the energy to drive the clock. As the pendulum approaches the vertical position, the electronics attached to the coil senses the magnet and applies a pulse to the coil. This pushes the magnet and hence the pendulum away and the process continues. The top of the pendulum is attached to an arbor and this turns a cam with two pawls. One pawl, called the pick-up pawl, pushes on the escape wheel. The other pawl then holds the escape in place while the pick-up pawl moves back for the next cycle. The remainder of the clock is a standard gear train to divide the rotation of the escape wheel down to minutes and hours. 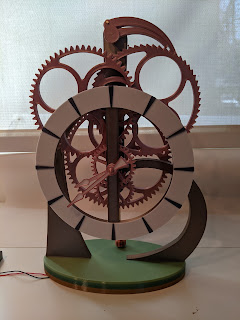 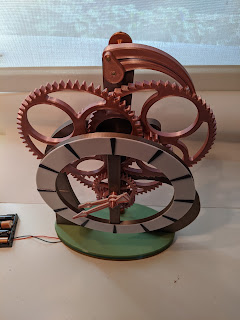 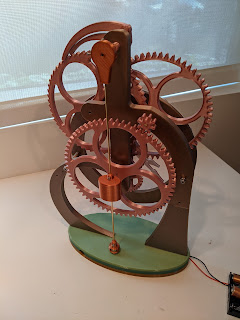 The version you see here is not quite final. I am going to replace the battery pack with power connector so I can connect it or a different power source. There is enough room to locate the battery pack in the base, but it disrupts the operation by attracting the pendulum. There's also a few screws sticking out while I make final adjustments and I will then replace them with shorter ones.

The original design was intended to be made out of wood. You can see many examples on the Toucan clocks YouTube channel. I bought a copy of the plans in DXF format and loaded them up into Fusion 360 to provide a starting point for the sketches. For parts where the dimensions were critical, I used these sketches directly, and for others I either adapted them (for example, the cam) or replaced them entirely (for example the weight bob). The original design used 3/8 inch arbors, and I replaced these with 3mm ones. Instead of printing separate gears, connectors and pinions and then gluing them together, I merged them into a single part. This is something which works nicely for 3D printing, but it difficult or impossible in woodwork. I undersized many of the holes for the arbors and for the pendulum shaft and drilled them out to either a tight fit or a loose one. I've not always been successful in getting good tight fits and so where possible I also provided holes for set screws.

One of the hardest parts to adapt was the frame. It is much too big to fit on the printer bed. It's possible to split up large pieces like this and then glue or otherwise connect them. However, I didn't like where the splits ended up so I changed the shape of the frame. It still needs to be split into three pieces: the main part of it, the left foot, and the curve reaching down to the right foot. You lose the nice curve on the left hand side of the original design by doing this. The joins are hidden behind the dial on the left and where the arc on the right joins the vertical part. In each case, as well as gluing the parts, there are some metal pins joining them. These help keep the parts aligned while the glue sets and provide a little extra strength. The dial is also slightly smaller, and has a central bar to help support one arbor and the hour wheel. It's held on to the frame with two M3 screws. I didn't really think ahead here, so I ended up having to use 45mm screws with a bit of padding behind the frame to get the length just right.

One reason for wanting to try this specific design was to see how easy it is to start with a plan designed for woodworking and adapt it for 3D printing. It worked out somewhat well. The process was a bit hindered by the ways the plans are supplied: the DXF is a single gigantic file some parts of which are actual plans, and some parts of which are descriptive text, assembly diagrams and other auxiliary information. It seems an odd way of doing things. Fusion 360 gets a bit heated when you load all this in, and so a fair amount of initial pruning was needed. I'm also a novice with Fusion 360, so the way I did some things might not be best.

The pendulum is a 2mm brass rod with the magnet holder as the bottom and the weight bob around the 25cm mark. Adjusting the position of the weight is a bit fiddly as it involves loosening the screw underneath it, and sliding it up or down. The bob holds quite tightly to the shaft so adjustment can be down without tightening the screw until it is in its final position. The weight itself is a few M3 screws in the shiny little bucket.

The pendulum is connected to the cam with a 3mm brass shaft. This is a problematic part of the design, as the weight of the pendulum is greater than that of the cam and pawls, causing the shaft to tilt to the back. There are a few ways this could be fixed; perhaps a counterweight on the front, or a longer support glued to the back of the frame. Another option would be to move everything in front of the from forward and lengthen the shaft. For now, it works OK as it is.

One tooth or two?

Looking at the examples of the Toucan clock on YouTube, there are two different philosophies about the position of the pick-up pawl and the stop pawl at the point where the pick-up pawl starts to push on the escape wheel. They can either be on adjacent teeth like this, or separated by one tooth like this. The clock runs either way, and you can set the way it works by adjusting the angle between the pendulum and the cam. It may make some difference to the required swing of the pendulum. Looking at the first 10 videos on the YouTube list, I saw 8 were adjacent (the Toucan closes its beak) and 2 were separated (the Toucan eats with its mouth open). I went for adjacent, which sets the cam a bit anticlockwise from the pendulum.

I experimented with various driving circuits. As mentioned in a previous post, I had no success with getting a 1 or 2 transistor circuit to work, and after fiddling around for a long time, I wasn't happy with any of the other options I tried. In the end, I decided to buy a ready made module from carveshop. It works well, but is a little pricy. I plan to spend some more time looking into this, in part because I have a second electromagnetic pendulum clock I would like to try.

Posted by Moosteron at 3:30 PM

The Thriecan clock looks great. I have built three of Steve's clocks and this one looks super interesting to build. Will you release the plans for this?????

I don't know I am allowed to. The original design was a wooden clock design by Clayton Boyer. Many of the parts are exactly from this design or closely based on it, as is the overall geometry of the clock. As Clayton charges for his designs, I don't think I could distribute the plans without violating the copyright agreement. (I just posted the same answer on Discord - apologies for duplication.)

Following my questions regarding releasing stls for your Thriecan clock, your answer included the name Clayton Boyer. I quickly "googled" him and have purchased his design for the Swing Time clock. I want to build the swingtime clock in wood but firstly was hoping to create my own stl files for 3d printing the clock.
Clayton included a DXF file which I have imported into Fusion 360. The dxf file includes all of the parts. I decided to focus on one gear and copied it and have tried to work on it with the goal of extruding it and then printing it.
I am very new to Fusion 360 (having spent a few hours now going through tutorials to try and learn the software package). No matter what I do, I am having problems with getting the gear to extrude.
I have read your article on mending broken dxfs.
I understand that you have imported Clayton's dxf's into Fusion. How have you done this? Have you imported the whole DXF and then broken it up into the various components using copy/paste etc
A few quick words would be most appreciated.

It was certainly a challenge to get the DXFs into Fusion, and I don't recall the exact steps I took. I think I did some cutting and pasting of the sort you suggested. I think also when you import DXFs there is an option which will split the DXF into multiple sketches and this can avoid Fusion 360 getting impossibly slow. I think this happens as it tries to connect disconnected segments, and if they are all in one sketch the complexity of doing so becomes overwhelming. It was also helpful to delete parts of the DXF that I didn't need, for example a section which contained textual description that wasn't needed to create the extruded models. I think in some cases I also created a new sketch in Fusion 360 and drew over the DXF so that it was in a better native form. Fusion 360 is hard to learn and if you are new to it, you might consider working through a few more simpler projects first. Sorry if this is all a bit vague - it's hard to remember the details.