Last time, I wrote about the design considerations for a clock adapted from William Strutt's epicyclic gear clock. Now it is time to complete the design by adding the frame and the driving/timing mechanism. There is one small change I made to the design documented in the previous post. The planet gear is mounted on a carrier pivoted on the minute arbor. This works better if you add a counterweight opposite the planet gear. A US quarter seems to be about right.

A few pictures and video of the completed design first, and then I'll fill in a few details. 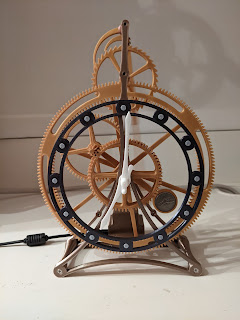 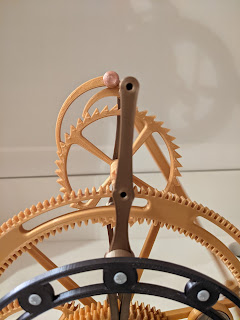 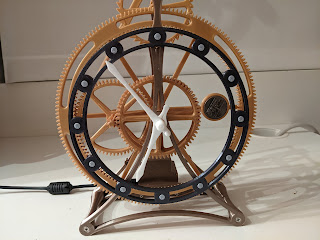 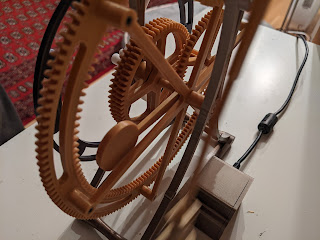 The frame for Strutt's original design (illustrated here) is rather ornate and a little too fancy for my tastes. I like the frame seen on a GrabCAD version and used this as the starting point for my own. The overall frame has to be taller than will fit on the print bed. In previous designs, I've looked for a point where I can split the frame and then joined the pieces with glue and pins. For my design, I decided to print it so that the very top part attaches with a couple of screws. This also allowed me to defer the decision about the drive and timing mechanism. Depending on what I decided, I could print the top pieces with different dimensions.

Most of the remaining design decisions concerned the drive and timing mechanism, that is how to get power into the clock and how to make it run at the right rate. The original clock used a spring, but I was not sure the plastic design would hold up to the stresses from it. Another option was to drive it with a weight attached to the minute arbor. The works OK for a wall mounted clock, but is not suitable for a desk clock. I toyed with using a stepper motor, but again did not like this. In the end I settled on the same drive as my two previous clocks: an electromagnetic pendulum. As before, the pendulum rotates a cam, causing pawls to engage with a toothed wheel. I'll call it an escape wheel, though this might not be an accurate use of terminology. The escape wheel then drives the ring gear via a pinion.

There are several design considerations. The number of teeth on the pinion and escape wheel must be chosen to drive the ring gear at the right rate; details of the calculations are in the previous post. The period of the escape wheel then determines the length of the pendulum, which must be less than the height of the frame at the pivot point of the cam. Finally, the teeth on the escape wheel must be large enough for the pawl to engage with it reliably. I considered reusing the exact escape wheel dimensions from one of the previous designs, but the escape wheel looks large and out of proportion. A smaller escape wheel is possible, but it must then have fewer teeth so that they are a reasonable size. After some playing around I decided on an escape wheel about 80mm in diameter with 40 teeth, with an 8 tooth pinion. This is about the smallest size of pinion that I was willing to trust. I used a trick I learned from Steve Peterson for the pinion. As only one face comes into contact with the ring gear, you can fatten up the teeth and make them stronger by displacing the trailing face.

I'll come back to the pendulum design in a moment, but first there is the question of how to design the cam and pawls given the escape wheel. A reason for wanting to reuse the previous designs is that I knew they worked. Unlike designs for standard escapements (such as the Graham escapement), I couldn't find any guidelines for working out the geometry. To solve this, I set up a sketch in Fusion 360 to try to make sure it would all work. Here is an annotated version: 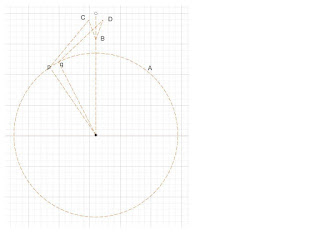 Circle A represents the circle at the base of the teeth, B is the pivot point of the cam, and C and D are the pivot points of the driving pawl at the limits of the pendulum's motion. p and q are the points where the end of the pawl would contact the teeth. The angles of lines BC and BD are set by how far the pendulum swings. Experiments with the previous clocks suggest it is about 20 degrees. We can freely choose most of the other dimensions: the escape wheel diameter, the position of the cam pivot, the length of the cam, and the length of the pawl (Cp and Dq). I could then measure the angle between the pawl position at the extreme ends of the pendulum swing: the angle between the radii to p and q. This must be more than the angle between two teeth, 9 degrees for a 40 tooth wheel, but less than the angle between two teeth, as we don't want to advance the wheel too far. Based on this, I was able to choose dimensions which appeared to work, and validated them with a quick and incomplete print.
The pendulum
I mentioned that an ideal pendulum would be 200mm long. The actual pendulum for this clock deviates from ideal in multiple ways. The period calculation for a pendulum assumes the angle through which is swings is small (a few degrees), while the electromagnetic pendulum in this clock swings by something like 30 degrees. Secondly, in the ideal case, there is a mass just at the end of the pendulum. We have to have the magnet at the end, and the position of this is fixed so that it is close to the drive coil. To make it possible to adjust the timing, there is also a moveable weight bob. In the last two design, I made the pendulum shaft from a brass rod. The weight bob was held in place with a set screw, making fine adjustment tricky. This time round, I printed the pendulum shaft with a thread cut in it, and made both the weight bob and magnet holder similarly threaded. Adjustment is then much easier, and a lock nut can be used to hold the weight bob in position once the timing has been set. The weight bob is just a small printed part with a couple of M5 bolts attached to it. There are two 12mm x 3mm neodymium magnets.
The electronic circuit is the one I described a while back. It is controlled by an Arduino Nano, and this has the nice property that the code can measure the pendulum period and report it over the Nanon's serial connection. The electronics enclosure is a bodge, with various things held in place with blue tape and an opening for the USB port which is far too large. It's held to the frame with a rather flimsy bracket. One day I will come back and do this properly. Maybe. 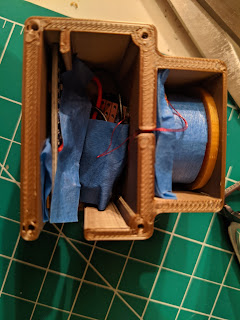 The pendulum moved very vigorously - so much so that the frame rocks slightly. If I did a redesign, I would make it a bit heavier. The clock is very quiet compared to the two other electromagnetic clocks.
Wrap up
This is my eighth clock and the first one I have designed entirely, other than drawing the initial inspiration and (initially) the gear ratios from Strutt's original. I went though multiple iterations both in silico with Fusion 360 and in the printed parts. It's a cliche to post a picture of your box of rejected parts, so I won't. I'm happy with the end result.

Posted by Moosteron at 7:14 PM

I love this design !
Very well done...
Is this design available somewhere for download ?
Payed or open licence doesn't matter...
I'd love to make one :)
Greetings,
PL.

Hi, thanks for your comment. I haven't made the design available yet, but will try to do so on one of the 3D printings sites (thingiverse, prusaprinters, myminifactory etc) when I have a bit more time to clean it up. There's a couple of things that are still not very satisfactory, and I haven't done anything about putting instructions together.

Hi Peter, I don't think I am going to have time to write instructions for the clocks, but if you reply with an email address, I can email you a file with the STLs and the Fusion 360 file.

I'm trying to build my own electromagetic pendulum clock.
First I used Clayton Boyer's toucan clock plan and modified it to the pendulum version.
Second I used the trick of Quartz clock pendulum drive that Steve Peterson said.

I almost succeeded pendulum and clock movement but some problems
such as too high voltage (8.0 V) and not perfect pawl engagement to the escapement wheel.

So I searched some advices from Google and I found your fantastic blog.
I decided your electromagnetic circuit and arduino sketch and I'm gathering parts for them.
Could you share last version of arduino code fine tunned and Fusion files if possible?
I'm just a hobbyist and no intention for the commercial use.

It's my blog for the failed version of pendulum clock but written Korean.
https://blog.naver.com/octane01/222695796440
My designs are still clumsy and I need more studies like you.
Thanks.
(My English is not good. Sorry)

Emm, I'm not an Unknown
My name is Jinho Bae ... email jinho.bae.69@gmail.com

Jihno, I will email you soon.