Jacques Favre has designed several interesting clocks, the designs for which are available on myminifactory. I built his Clock 24 design. It is weight driven, and uses a Graham escapement. The run time when it is mounted at a reasonable height (5 feet or so) is about 24 hours. This could be increased by using doubling the weight cord through a pulley. 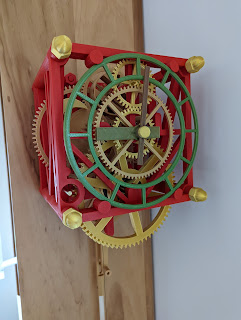 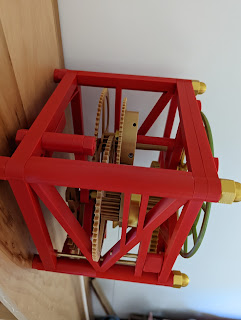 One striking thing about Clock 24 compared to all of the others that I've made is that it is huge. The scape wheel and largest gears are almost twice the diameter of the ones in the first Peterson clock and the frame is corresponding larger. It uses arbors of 5mm and 2mm diameter, compared to 3mm and 1.5mm in the Peterson clock. I'm not sure of the consequences of this for ease of getting it going. I think it probably makes it a little less sensitive to printing tolerances. Does it make it more or less sensitive to friction? The contact area with the arbors is larger (more friction) but bears less force per unit area (less friction). I just don't know. As with previous clocks, I used brass rods for the arbors as it's easy to cut them without power tools.

I found it quite easy to get going after a made a few small adjustments; mostly adding some extra washers to keep some of the gears clear of each other. There are a few variants for the design, the most interesting being in the mechanism which goes between then main gear train (known as the going train) and the winding gear (which carries the weight). This can either be two gears with a simple ratchet, or a more complex design with a spring to act as a power reserve for the going train during winding. I elected to go with the simpler option. The escape wheel also has two variants, one with full depth teeth and one with tapered teeth which may have lower friction. I started with the tapered version, but found that the anchor tended to wobble as it only has a small area of contact with the escape wheel teeth. The non-tapered version worked better.

One interesting design choice is the clutch. In the Peterson clock, this is done by a spring which holds a gear and a spacer in contact. The Clayton Boyer design that I built uses a small pad of leather held against the arbor with set screw. Favre's clutch sandwiches the arbor between two metal rods with screws to adjust how tightly it is held. I didn't take a picture before assembling the clock but perhaps you can see it here: 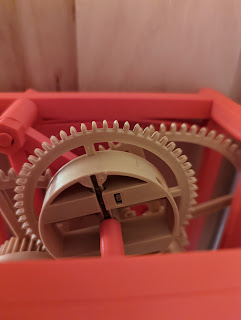 I am still testing the clock. I have the timing quite well tuned now. The weight is about 1.3kg; less might work.  As I write this, it has been running for a bit over 12 hours continuously. A couple of previous runs stopped after 1-2 hours and it seems that something was binding. Some of the previous clocks have stopped when friction has consumed too much of the power of the clock. You see the pendulum losing more and more of it swing and finally dropping below the amount needed to engage with the escape wheel. When Clock 24 stopped, it seemed more like something in the gear train had locked up, and it took a nudge to free it and get things going. It may be that the gear can't move freely enough on the arbors (not enough endshake maybe). If it binds again, I'll see if I can get a better idea of what is going on.

Posted by Moosteron at 8:18 PM

Nice build
Mine runs well with 2kg
I see that yours has plenty of swing with 1.3 kg
One issue that I have seen when the clock has the pendulum swinging less and less is a build up of dust on the pallets
I suppose the electrostatic charge of plastic rubbing togheter
I simply wipe the pallets and the clock runs like new
Now if clocks goes fine and just stops, something, a blob of filament might be the cause
When stopped I would check the gears one by one
Does the escape wheel has free play? the back lash in the gear must be noticeable, might need to position the anchor so it is out of the way
Then move towards the next set of gears
Usually I find the binding spot
My clock has been running for a couple months without issues
Often times after a few weeks I can reduce the driving weight
Last thing, I print all the gears one by one, to minimize stringing issue
Good luck with your projects
Jacques