I think this post is mostly directed at my future self, as a reminder of what I did. Here goes anyway.

I have roller blinds in my house made by Mechoshade. They are the sort where you use a metal beaded cord to raise and lower it. Inside the mechanism there is a clutch, between the indented wheel which the cord engages with, and the hex-shaped shaft of the blind itself. The clutch for one of the blinds has failed multiple times. After the original failure, I printed a replacement in PLA: 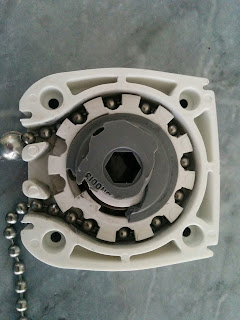 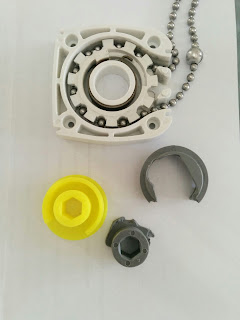 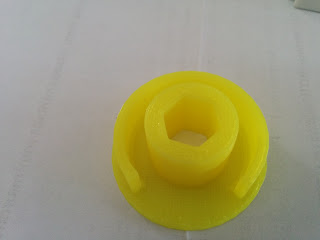 This was in October 2015. I have not tracked how often it has failed since. It's probably two or three times. Usually I print the replacements at 0.2mm layers, 100% infill (if I remember), using PLA. I have tried PETG, which failed immediately. The most recent replacement was a few days ago, and I hope it will hold for a year or two. However, this got me thinking about other materials. Ideally you want something which is strong but not brittle. Strong, because the blind is heavy and I am not always gentle with the cord. Brittle materials tend to fail suddenly after multiple stress cycles, which seems likely to be the case here. PLA has the strength, but is also brittle. PETG didn't work because it is not very strong. A chart on Taulman's web pages gives a good guide to the material characteristics. I decided to look at nylon and two related filaments.

For Nylon itself, I bought a 200g roll from Gizmodorks. I didn't note the exact print settings I used. The results were not great. A first attempt had a poor finish with blobs all over the surface. I think this was at 250. A second attempt with a lower temperature had a better finish but the print delaminated. It is possible that the filament had not been kept well. Nylon is hygroscopic and some sites say that even a few hours exposure to the air will make it damp enough to cause problems. The print surface was blue tape with glue stick. Blue tape on its own was not enough, and when using an unknown filament I prefer not to use PEI sheets so as not to risk damaging them. 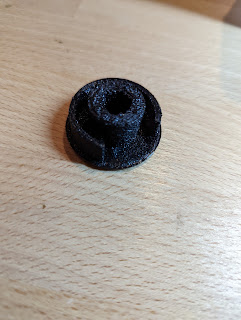 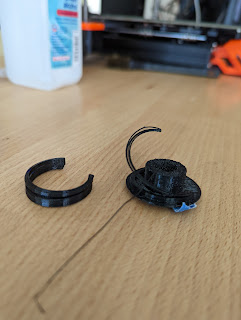 Next, I tried Taulman PCTPE. As I understand it, this is a mixture of nylon and a flexible filament similar to TPU. I used it once before, a long time ago, to make a headphone holder and found it to be very strong. For the print settings, I started with one of the flexible filament profiles in PrusaSlicer, and increased the volumetric flow rate to 5mm^3/s. Initial attempts on blue tape warped. Blue tape with glue stick worked. I also started with 240/50 and then reduced it to 220/50 for the successful print. You can hear bubbles popping a higher temperature and see water vapor coming off it. The result is quite flexible, possibly too much for the clutch.

Finally, I tried Taulman 910. This is supposed to be very strong under tension, while still having some flexibility. Some people say it is hard to print with and needs a high temperature and an enclosure. For met it worked fine at 240/50 on blue tape with no need for glue stick. The result is a little more flexible than I expected. It definitely feels strong; I have no way of evaluating this more precisely. 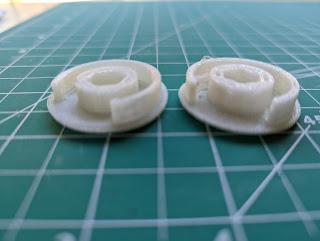 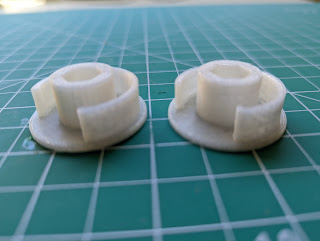 (Sorry for the poor pics. My camera was having difficulty focussing.)

I have not fitted the new clutches yet. It's a nuisance to take the blind apart so I'll wait until it fails again. This might not be for a year or two.

Posted by Moosteron at 2:07 PM