Sometimes I need to print objects which are too large to fit on the print bed by splitting them into parts. I've used this in particular for the frame of some clocks such as the Thriecan. I have been reluctant to use this for parts such as gears where the dimensions need to be precise. A project that I am working on calls for a gear too large for me to print, and so I decided to conduct an experiment to see if I can split it and still get a working gear. As with other split parts, I make some 1mm holes in the part and then use metal pins to get the parts into alignment, and glue them with a gel cyanoacrylate. I have been using Loctite UltraGel.

I made a test piece consisting of a gear about 50mm in diameter, with the split in the gap between teeth. This is the least critical place for functioning of the gear as it never comes into contact with any other gear. I did two versions of the split gear, for reasons which are explained in the "aesthetics" section.

The results look like this, with the unsplit gear at the top. First, the right way up, and the upside down, with the the side that was in contact with the print bed facing up. I did no finishing on the gears, as you can see from the stringiness. If you enlarge the pictures, the pins are visible. Normally I would trim them to size so that they are hidden. 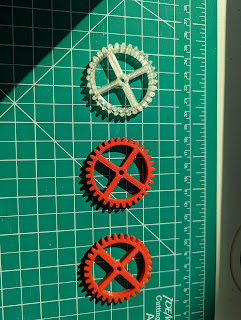 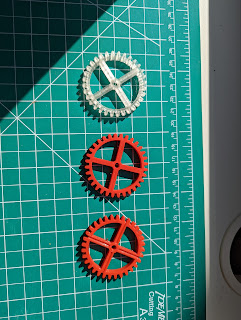 The most important factor is whether the size of the gear is correct, defined as similar for the split and unsplit versions. I measured the distance from the end of a tooth to the one diametrical opposite, across two axes at right angles. I chose the axes like this 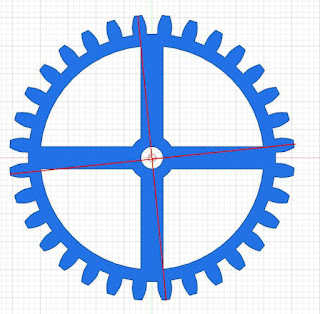 so as to emphasize any effects from the split. For the unsplit gear, the axes measured 50.75 and 50.82mm; for the first split gear, 50.71 and 50.83mm; and for the second split gear, 50.58 and 50.89mm. The differences are negligible at this size of gear. They are likely to stay constant in the size of the gear, so by the time we get to something where the gear needs to be split to fit on the print bed (roughly 4 times the size here), they will be even less significant.

A second consideration is whether the split will cause weakness in the gear that could affect its operation, either by causing it to deform during use or even to split apart altogether. I don't have any good way of evaluating this. For building clocks, it probably does not matter, as there is not usually a lot of mechanical stress extending across the halves of the gear except near the power source (drive weight, spring, etc.). Even so, the bond is strong. I was not able to pull apart the two halves of the gear except in one spot where I had not applied very much glue.

The split can look a bit ugly, or at least noticeable. You can see this quite clearly on the middle gear in the second picture. The third gear shows a possible solution to this, but adding a notch to both the spoke with the split and the other spokes, so they all look similar.

Posted by Moosteron at 9:58 AM