The latest prototype gets a bit closer to being a real clock. The frame is much more robust, and has a weight drum connected via a ratchet. Somehow I got a whole lot of things wrong in this version. It simply didn't run for more than a few seconds at first. The pendulum would swing for a short while and then stop. I spent a long time searching for sources of friction, and removing some parts of the mechanism such as the hour train and reprinting or drilling out others. This revealed a few things that could be improved. For example, the bearings for the fork arbor were very tightly fitted, and so unless they were exactly square, this put extra friction on the arbor. However, they real reason turned out to be that I had the fork inverted. The sketch I had constructed from it in Fusion 360 was for an escapement which turned the opposite way. In the earlier prototypes, I had remembered to invert the part but this time I didn't. As a consequence the pallets were oriented wrongly and didn't receive any push from the escape wheel teeth and the pendulum ran out of energy.  A definite case of a short circuit between the ears. Once I had fixed this, things worked a lot better - still stalling sometimes, but I have had a test run of 4 hours with no problems.

Now you might think this is recorded at half speed, but it isn't! It seems that I got the gear ratio between the escape wheel and the second wheel wrong. The pendulum is going at the right rate, but everything after that is wrong. The brain really wasn't working well the last few days. 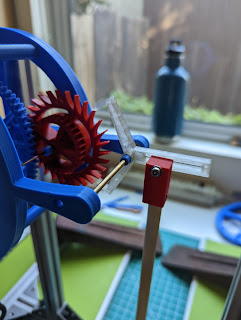 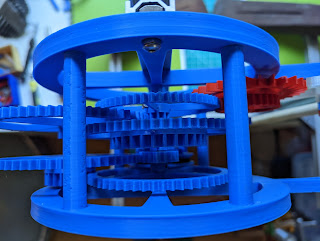 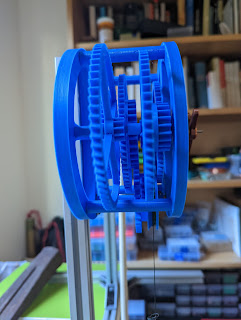 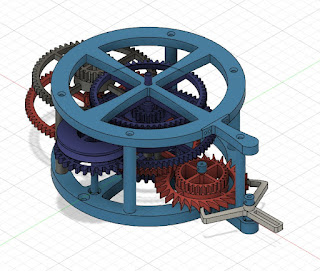 There are still plenty of things to fix or add:
I think a lot of this can be fixed using the same frame (or something very similar), by rearranging the position and orientation of some of the gears. The decision to arrange that all the gears have the same distance between their centers helps here.
Posted by Moosteron at 7:06 PM