After my optimism about prototype #4, I reassembled it to make some minor tweaks, and found it was back to stalling. Something I noticed was that the tick got louder and quieter, and this was happening on a 60 second cycle. So that made it pretty clear that something was causing friction in one of the gears with this period, either the escapement wheel or the seconds wheel, or there was a problem in the interaction between them. The clock didn't always stall then the tick got weak, but eventually due to some random factor there would be too little energy to keep the pendulum going. To try to work out the cause, I marked a reference position on both gears, and then moved the position of one relative to the other. I could see that when the clock stalled, the second gear was always in the same position, but the position of the escape wheel didn't matter. The second gear is held on the seconds arbor with a set screw, and the position of this suggested that it displaced the second gear slightly towards the escape wheel, corresponding to the lowest energy, highest friction position. Some clock designs prefer to make the gear tight on the arbor. I don't do this, as it makes it hard to adjust the gear position, and over time it may start to slip. However, with the tolerance issues on the gears I mentioned in the previous post, it was enough to make the gears too tight. I proved this by removing the set screw and seeing that the clock ran well, though of course the seconds hand then didn't turn. A more durable solution was to slightly drill out the escapement arbor to 1.7mm, in the same way I drilled out the other arbors. After this, we were back to reliability. For now :-)

For illustration, here is the fit as seen in Fusion 360 between the seconds wheel and the escapement wheel: 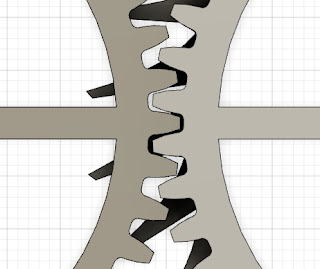 One large square is 5mm. And here is the seconds wheel and the intermediate wheel: 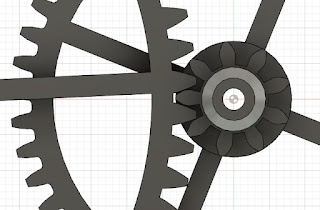 The clearance is only about 0.3mm in each case.

Posted by Moosteron at 3:08 PM