For a last round of experiments on prototype 4, I looked at the effect of the weight and drum size. I had been fixing the seconds wheel to its arbor with a set screw. I think this still resulted in extra friction, either from constraining the meshing with the other gears, or (more likely) because of friction between the seconds arbor and the minute tube. For the next experiments, I removed the set screw. The second arbor (and hand) no longer turn, of course, but the friction is significantly less.

How does the weight affect the running of the clock? I tried different weights, and in each case measured the swing of the pendulum against a ruler. Some minor trigonometry turns this into the swing in degrees, each side of the center. Here's a graph of how things change, showing the angle against the weight in grammes. The values are approximate: 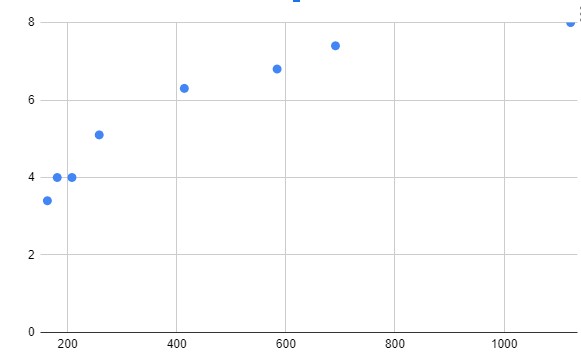 Two things are noticeable here. First, in this low friction configuration, you can reduce the weight to a really low value. It would still just about run with only 160g, though at this level any slight upset (such as a strong draft of air) could stop it. Second, it's really apparent that a small relative increase in the weight matters a lot more for small weights than for larger ones: the relationship is not linear.

Next, I swapped out the weight drum for one with half the diameter. Now we would expect 7.85 cm/hr. The measured value was 9.4 cm/hr, or after correcting for the clock running fast 8.5 cm/hr. It's a bigger discrepancy than before; I'm not sure why. This would give a run time of a little under 19 hours. The minimum weight in this case was around 400g. Even with my larger 1100g weight, the running was a little flaky, and this proved to be that minute wheel was sliding backwards on it arbor and sometimes interfering with the escape wheel. As I've iterated on the design, I've been using slacker tolerances on the spacers, and I think I've taken it too far.

Finally I did a crude version of doubling by looping the weight cord through the top of the weight and clipping the end of it to the frame. It runs, though a little weakly at 1100g, giving 4.8 cm/hr. After the 10% correction, this would run for 37 hours on a 1.6m drop, which is starting to look good. 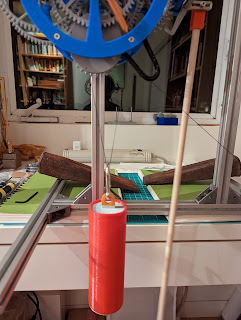 The smallest weight I tried was around 700g, and it ran better with this than I expected.

I wanted to try using a reduction gear from the weight to the minute wheel, but the frame design doesn't allow enough space for anything other than 1:1.

This is as far as I intend to take prototype 4. I have a number of ideas for the next version:

Posted by Moosteron at 3:08 PM